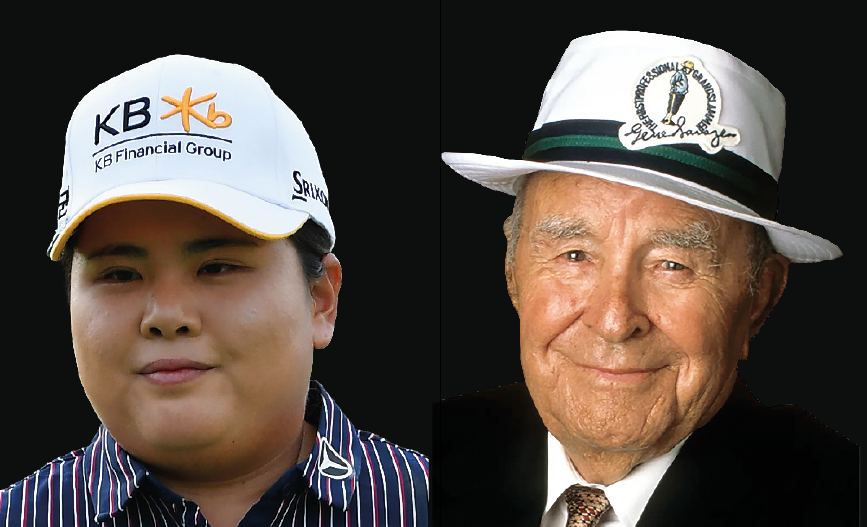 With seven Grand Slam titles each, they share seventh place in the rankings of major championship winners. They are American Gene Sarazen and Korean Inbee Park...

It isn’t possible to understand modern golf without taking Gene Sarazen into consideration. He was one of the game’s greatest players, dominating the sport in the 1920s and 1930s. The son of Italian immigrants, Gene – who changed his name, Eugenio Saraceni, because it sounded like a violinist – accumulated numerous victories in his long career and was the first player to win all four Grand Slam titles.

Known as The Squire, because of the huge tracts of land he owned, he was born in Harrison, near New York City, on 27 February 1902. The son of an Italian immigrant who didn’t understand golf, he changed his name after securing his first tournament title, winning $20. He had carded a hole-in-one and, appearing in the newspapers, he didn’t like the way his name came out, “as it seemed like a violinist”, he said later.

When he began as a caddie at just eight years of age, no one could have imagined that the small boy with a fair complexion would become one of the best golfers in the history of the game. Furthermore, in that era the only ones playing golf were brokers and bankers, so becoming a professional meant overcoming various social barriers.

In 1918, he nearly died because of a flu epidemic. When he recovered he moved to Florida, where he worked unloading tiles while he improved his game. Four years later, he had won his first two Grand Slam titles (US Open and US PGA Championship, both in 1922) and the following year, at just 21, he won the PGA again.

The rest of the decade he spent competing mostly in exhibition tournaments. So it wasn’t until 1932 when he won another major, the US Open. This heralded his best year, when he also won the British Open. His victory in Britain was achieved – apart from his great play – thanks to one of his brilliant inventions: he designed and used a special club for hitting the ball out of the bunker. Even though it was created in 1931, he delayed bringing it out earlier so it wouldn’t be banned. Today, it is an integral part of any golfer’s set of clubs.

Sarazen won his third PGA title in 1933, and two years later, with his victory in the 1935 US Masters, he became the first player to win all four Grand Slam events (British Open, US Masters, US Open, US PGA Championship). Only four other players have achieved the feat since: Ben Hogan, Gary Player, Jack Nicklaus and Tiger Woods.

His victory in the Masters has passed into history for another reason: on the final day he was three shots behind the leader, and carded an albatross on the 15th – considered the best shot in history. It became known as “the shot heard around the world”. The next day he won on the first play-off hole.

As time went on, he began alternating between the main US PGA Tour and the Seniors Tour. He won the US Seniors PGA in 1954 and 1958, and returned to the news pages in 1973 when he became the oldest player, 71, to score an ace in the British Open.

Sarazen was a member of the US Ryder Cup team on six occasions (between 1927 and 1937). He has been in the US PGA Hall of Fame since 1941, and – as one of the Masters pioneers – from 1981, together with Byron Nelson and Sam Snead, hit the official shot to launch the tournament every year. When, in 1996, the US Tour inaugurated a prize for lifetime excellence, Gene was the first recipient.

He died in Florida on 13 May 1999 suffering from pneumonia. He was 97, leaving an incomparable golfing record behind him.

She was only 19 when she became the youngest player to win the US Women’s Open. That was in 2008 and it was the first victory by Inbee Park, a young North Korean girl who had started playing golf at 10 years of age, and at 12 had moved with her family to the United States to focus her life on the sport. She immediately showed her talent on the American Junior Golf Association (AJGA) circuit, and she was elected AJGA Player of the Year in 2002, the same season she won the US Junior Girls Championship.

After finishing school, Inbee moved to Las Vegas and played on the University of Nevada team for a year. In 2006 she turned professional thanks to a change of rules on the US LPGA Tour that allowed her to convert from amateur to professional status at 17 instead of 18 years. She obtained her LPGA Tour card for 2007 by finishing third on the Futures Tour.

A year later, the young North Korean achieved her first victory on the LPGA Tour, and nothing less than in one of the majors: the US Women’s Open. She was two weeks shorts of turning 20 and became the third youngest player to win a major on the LPGA Tour.

The year 2012 was Park’s massive breakout season. In 15 events on the US circuit, she won twice and had 12 top-10 and 10 top-five finishes, including second place in the British Women's Open.

And 2013 was even better: six wins, including three majors (Kraft Nabisco Championship, Wegmans LPGA Championship and US Women’s Open) in the 13 tournaments she played on the LPGA Tour. Park became the first golfer in the modern LPGA era (with four or more majors) to achieve that feat.

With these extraordinary results it was not surprising that Park reached number one in world, for the first time in April 2013. She ended that year as the leading prizemoney winner on the LPGA Tour and Player of the Year.

In 2014 she added three more wins to her curriculum, including another LPGA Championship, and the following year a further four, among them the same major (renamed the Women's PGA Championship) and the British Open.

In 2016 at the Rio de Janeiro Olympic Games, she became the first player to win an Olympic gold medal in golf since Margaret Ives Abbott in 1900.

Despite that medal, 2016 was one of Park's worst season due to injuries, one in her back and another in her left-hand thumb. Finishing a tournament became a titanic task and she started, cruelly, to miss all cuts. In spite of everything, she was determined to go to the Olympics and, although she had the Korean media against her, she managed to be chosen for the Games. In the Rio final she faced a challenge from the then number one in the world, Lydia Ko, and won by five strokes. An estimated one-quarter of her country’s population watched her triumph live on television, and that was at half past one in the morning in South Korea.

“This is definitely one of the special moments in my golf career and in my whole life. I feel great,” said Park, who had earned entry to the World Golf Hall of Fame earlier that year. “Representing your country, winning gold, is very special. It is really all I wanted. I am happy. Somewhere in my heart, after making the decision to play, I really believed I could do it. If I didn't trust myself, I wouldn't be playing this week.”

Inbee still had problems with injuries in 2017, although she managed to play quite well during the first part of the season. In fact, after a modest return to action in Thailand, she achieved the 18th victory of her career, the HSBC Women's Championship in Singapore. Park had other good results (five top-10s) but the back injury forced her to end her season in August.

In 2018 she didn’t play in many tournaments, even though her back pain had significantly improved. Nevertheless, she achieved her 19th and (to date) last victory – the Bank of Hope Founders Cup – and a few weeks later she was battling in a play-off for her eighth major, at the ANA Inspiration. Eventually, she succumbed to Sweden's Pernilla Lindberg, who secured her first victory on the LPGA Tour. She tied for eighth in the Evian and was ninth in the US Women’s Open, but didn’t make the cut in the other two majors, something that had never happened before in her career.

Her best results in 2019 have been second places in the Kia Classic and Arkansas Championship. In the majors, she achieved two top-10s (seventh in the Women's PGA Championship and eighth in the Evian Championship), was 16th in the US Women’s Open and 68th in the ANA Inspiration, and missed the cut in the Women’s British Open.

This season (at the time of going to press) Inbee had six top-10 finishes and has had won $709,000 in prizemoney on the LPHGA Tour  (more than 15 million in her entire career). Inbee was eighth in the world rankings.