The perceptive vision of businessman Joseph McMicking, founder of the Sotogrande macro-urbanisation, was key to the project’s success. It was McMicking who asked legendary designer Robert Trent Jones Sr. to personally choose the land for a sprawling 18-hole course, without any limitations. The farm estate, by the sea, could not have been more suitable. In 1964 one of the most extraordinary golf courses in Spain was inaugurated: the legend of Royal Sotogrande was born.

There are many factors that have played a role over the years in forging the course’s international status for par excellence. Club general manager Agustín Mazarrasa reveals the main ones to us...

The Royal Sotogrande design is described by Agustín Mazarrasa as “unique in Spain”, and without a doubt it is. Robert Trent Jones created a revolutionary design, as it was the first American-style course to be built in Europe. The former farmland where it now sits is stunningly beautiful, predominantly cork oaks, which are now combined (to a much lesser extent) with pine, palm and other tree species. Thanks to its wide fairways, it is a very open course from the tee, a design generosity that is offset by elevated greens, so characteristic of Trent Jones.

As the British-born designer raised in the United States said, Royal Sotogrande is a course where it is quite easy to card a bogey and not easy to make par. The good thing about this layout is that it is fun-to-play for players of all levels, “from scratch to handicap 36”, adds Mazarrasa. In his book Golf’s Magnificent Challenge, Robert Trent Jones said that, of the more than 400 golf courses he had designed around the world, this was one of his five favourites. It was the first course in Europe with Bermuda 419 grass and with automated irrigation.

A major course restoration project carried out in 2015 and 2016 – which was a much-needed upgrade after 50 years of existence – equipped the Trent Jones design with a modern and comprehensive infrastructure that included, for example, a sub-air system on all greens (Augusta National, home of the US Masters,  has the same system) that allows the water to be drained very quickly.

The course has always been characterized by its impeccable maintenance. In the early days, when it had just been built, there was no other course in Spain with a similar high level of maintenance, says Mazarrasa. "It was quite a revolution in agronomical materials. Right now, with all the changes that were made during the restoration – drainage, sand, Bermuda, restoration of the original design of the greens – we are justified in saying that the course is at the same level as top US courses where the US PGA Tour is played. We have it at tournament level every day.”

With greenkeeper Patrick Allende at the helm for a decade, Royal Sotogrande has a highly professional maintenance team (around 30 people), and members and visitors alike greatly appreciate not only the quality of the 18-hole course but all the other golf facilities, including the practice range that we restored in 2018, a short course, which has the same maintenance quality as the main course, and areas for short game practice. The course is renowned for having very fast greens, and tee areas and fairways that are of an extraordinarily high quality.

Royal Sotogrande is a benchmark for the best amateur golf on the continent, and it has also been the venue for top-category professional tournaments, such as the 1966 Spanish Open won by Roberto de Vicenzo. The following year, the Argentinean, at 44 years of age, became the oldest player to win the British Open, after an exciting battle with Jack Nicklaus and Gary Player.

In 1987, the course designed by Robert Trent Jones was the scene of Severiano Ballesteros’ victory in the Spanish Professionals Championship. Between 1996 and 2001, it hosted (together with San Roque Club) the final of the European Tour Qualifying School, with Ian Poulter, Geoff Ogilvy, Justin Rose and Nicolas Colsaerts among the players who won their cards. 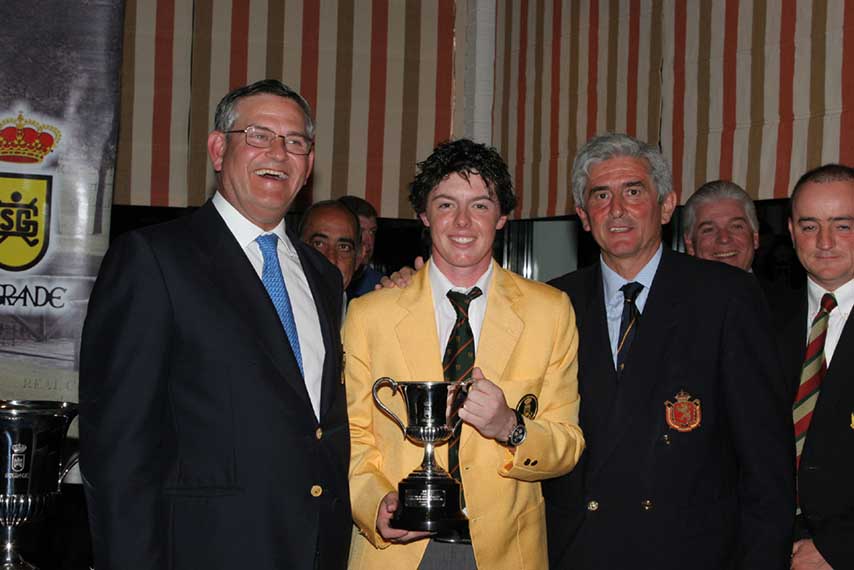 Launched in 1970, the Sherry Cup was the forerunner of the current European Nations Championship-Sotogrande Cup, which welcomes leading amateurs from several European countries every year and in the past has been won by players of the stature of Padraig Harrington, Sergio García, Rory McIlroy, Francesco Molinari, Shane Lowry and Carlota Ciganda – while Jon Rahm was second (lost in a play-off) one year. "It is the most important amateur tournament in Europe, above the British Amateur, with the most top players," notes Mazarrasa.

In 1973, the seventh European Amateur Women's Championship was held at Royal Sotogrande, where England won followed by France, Sweden and Spain. “We have always been very focused on amateur golf – it’s our hallmark,” says Mazarrasa. It is also common to see both Spanish and international pros from the European Tour practising at the course. "A lot of the professionals who played in the Sotogrande Cup when they were amateurs like to return here to play again."

After the major renovation project for the main course (2015-2016), in 2017 the short game practice area was built, and in 2018 work was focused on updating the short course and the driving range. Once all this is completed, the club will have unrivalled golf facilities, "comparable to the magnificent facilities that top golf courses in the United States have", says Mazarrasa.

Other sports facilities at Royal Sotogrande include two plexipave tennis courts, “like those for the US Open and Australian Open”, and two pádel tennis courts, a swimming pool, a croquet lawn and a well-equipped gym.

The club’s restaurant also warrants a special mention. “Our chef has been with us for 20 years, Mikel Landa from Gipuzkoa, who trained at Arzak and Echaurren, two great restaurants," explains Mazarrasa. "We open more than 100 nights a year for members and members’ guests, and we also do private dinners for groups." Landa's cuisine is characterised above all by the extraordinary quality of its ingredients and the best seasonal products. “We do a lot of themed dinners: tuna during the tuna season, mushrooms, game... He has an excellent team, and members and others who dine here thoroughly enjoy it.”