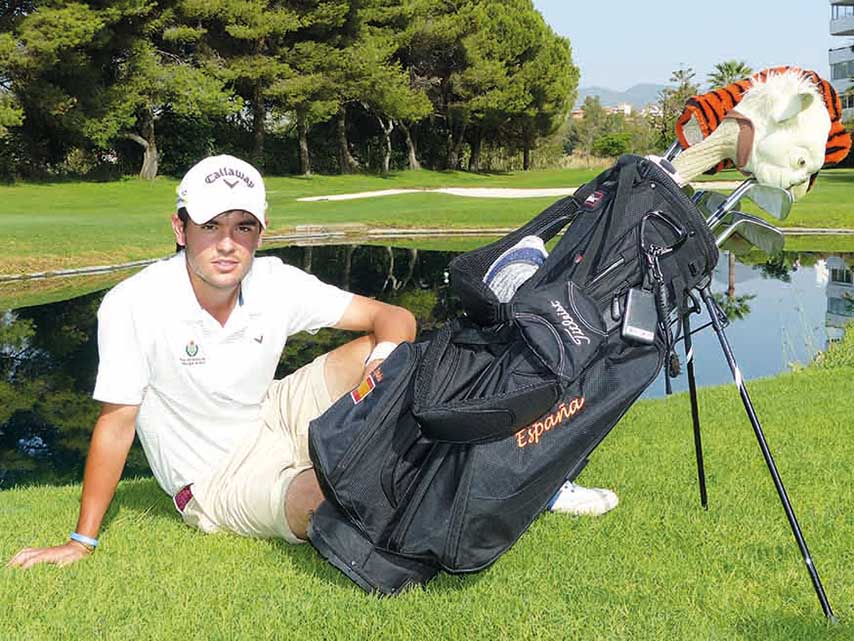 Ángel Hidalgo Portillo is an 18-year-old Marbella-born golfer who plays out of Royal Guadalmina Golf Club and is shining on the national amateur golfing stage thanks to some excellent results this past summer. He began playing golf when he was just two years old, at the Golf El Ángel Academy in Marbella’s Golf Valley, encouraged by his grandfather and father, also named Ángel and a golf professional.

He soon began winning his first tournaments in Andalucía, in the novice and youngest child categories, and later as a junior he was selected for the national under-14 team, thus initiating a successful journey outside his home region and country.

His main accomplishments so far have been achieved this year, specifically during the summer months: the Spanish national amateur champion’s title in El Saler; and victory in the Spain Under-18 International tournament in Bonalba – involving teams from Italy, France, England, Italy, Finland, Denmark, etc. – where Ángel won both the individual title and the team trophy. He also was victorious in the Andalucian Under-25 Championship played in Málaga, and the Norberto Goizueta Memorial at Royal Guadalmina – the club where he is officially registered as a federation member, where he practises and where this interview was held.

- What are your short-term goals?

- I would like to complete Bachillerato (senior high school) with good grades and then study at a U.S. university. I have many friends here, from Guadalmina, who have gone over to America and it’s going well for them. I’ve always received very good references about US universities: they provide a lot of support for the sport and it improves your English. I believe that there, whether you like it or not, the standard is higher than here, and if you want to stand shoulder to shoulder with the best you have to move over there.

- And as for golf? Do you see yourself having the opportunity of forging a career in golf?

- I would truly like to – at least I will try to. Right now, when I’m playing so well, even more so, but that would be another couple of years, God willing.

- Are you receiving support from the Andalucian Federation?

- Actually yes. The Andalucian Federation is doing a very good job, and also the Spanish one, taking us to all the tournaments and providing a great deal of support.

- What is your normal practice routine here at Royal Guadalmina?

- I mostly like to go first to the practice range, warm up a little and hit a few balls, although I don’t like to hit balls for too long – half an hour or at the most one hour. Then approach shots for a short while, 10 to 15 minutes, and later I spend a lot of time putting – which I really like a lot.

- Where do you feel most comfortable with a club in your hand: on the tee, fairway or green?

- On the green, without a doubt, with the putter. I play well with the driver but I need to improve with my irons.

- Do you see yourself on the US Tour within five years?

- What advice does your father give you?

- What he especially wants is for me to complete my studies: that’s the main thing for him. And if golf works out well, even better, but studies first.

- I haven’t thought about it yet because I don’t want to weigh myself down too much.

Ángel was planning to compete in the Puerta del Hierro tournament at La Cañada, the Balearics in December, the Andalucía Cup in January at Guadalmina, the King’s Cup…