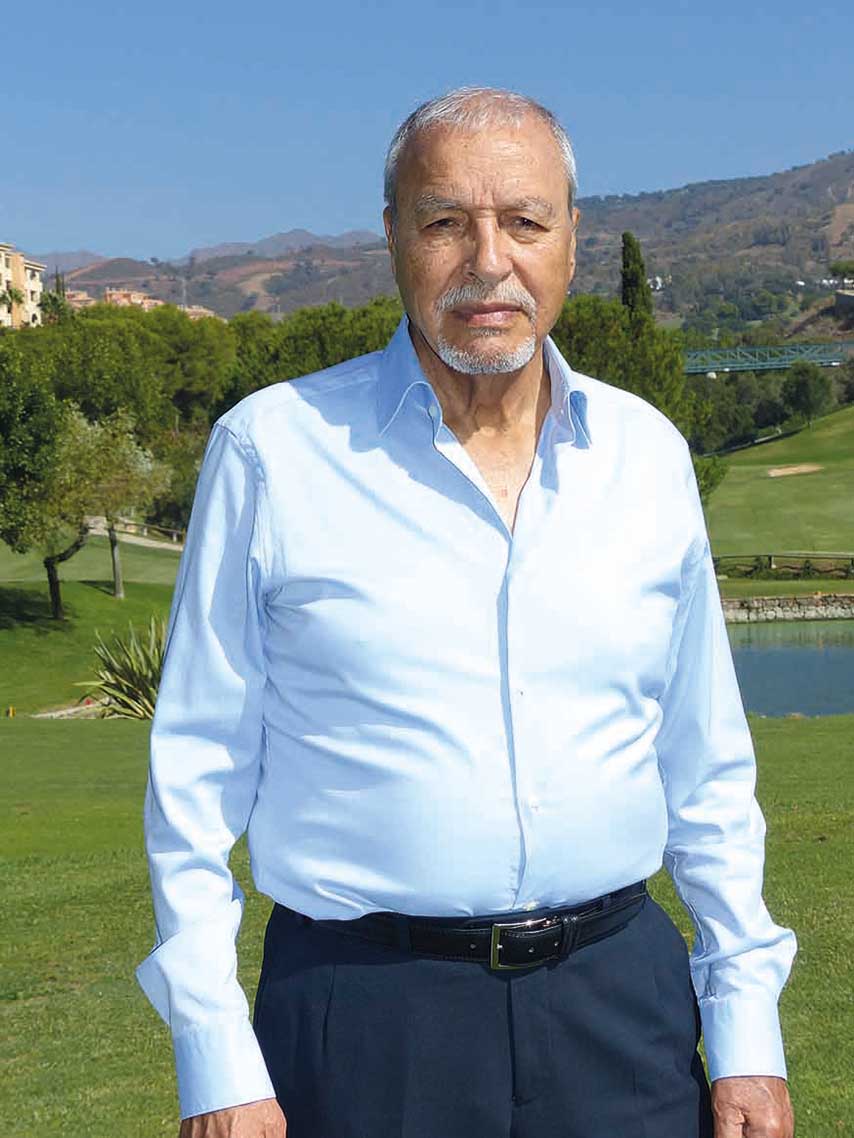 A Global Journey from Banker to Golf Club President

For three decades from the 1960s, Abdullah Saudi was highly respected as one of the world’s leading banking figures. He founded the Libyan Arab Foreign Bank and Arab Banking Corporation (Bahrain), and was voted one of the most Innovative bankers by government representatives and international commercial bankers attending the IMF and World Bank meetings in 1980. Over the years he has received numerous industry accolades, including the Best Banker award from the Association of Arab American Banks in New York in 1991 and the 1993 Arab Banker of the Year award from the Union of Arab Banks.

He came to Spain for the first time in 1974 to set up Banco Árabe Español (now Aresbank) and serve as chairman of Banco Atlántico, and in 1977 received the Civil Merit Medal from the then Spanish monarch, King Juan Carlos.

His initial contact with golf came in the mid-1960s when he was elected chairman of Tripoli Golf Club, although – interestingly – he had never played the game. The beachside club was part golf course-part social, and the Libyan banker was more active on the latter side. In fact, he won the election when the “social” members defeated the golfers.

Not unsurprisingly, the lure of golf was difficult to avoid. As he recalls, “One day I went to the golf course and the pro, who was teaching some people, told me, ‘You’re the chairman and you don’t even know how to hit a ball with a golf club.’ I told him I was more used to big balls, basketball, not trying to hit a small ball into a small hole. So he said, ‘Try it and see if you can hit it.’ And instead of hitting the ball I was hitting the sand. So that’s how I got started in golf.”

In the following years Libya experienced great upheaval as the Gadafi revolution took hold. “He was a guy who didn’t believe in sports. The golf course land was distributed to military officers, so people could build their houses.”

Abdullah Saudi retired from banking in 1995 and became a partner with a group of investor friends who bought Santa María Golf & Country Club. “I thought it was particularly interesting, and for me it was something different. I’m a banker by profession. I was always sitting on the other side of the table, never borrowing money. I used to lend money (laughs).”

How were those early days?

It was not an easy period, very up and down. They were difficult times, especially here for real estate and golf. It only really picked up when there was a boom towards 1998. When the present owners came in there were only nine holes and in 1995-1996 we started to build the second nine. The clubhouse used to be the home for the original owner of the whole area, and we are pleased to be able to maintain it because it has great character, and is completely different from other more modern clubhouses.

I should note that we bought the real estate rather than the golf course. We saw the golf course as a complement to the project, for those people who lived in this area. Golf would never have really paid off for investors but it needed to be added as a complementary service for people living here, together with other features and facilities (Santa María also has a swimming pool, lawn bowling rink, and tennis and paddle tennis courts). Those buying real estate had the priority option of joining the golf club, and were given a discount compared to non-residents. It was like a desert here at the time, and this was the first real estate project. Since then, we have been mainly selling the land rather than developing it, with others undertaking the building projects.

Following Santa María Golf, five additional courses were built in Marbella, as well as many others throughout the Costa del Sol. What effect has this increased “competition” had on your club?

It has been a very challenging period for us. We have had good times and difficult times. We are not afraid of competition because there is definitely an advantage when an area like this becomes a leading golfing destination. It means you have a lot of people coming to play the game. And then only the ones providing top services will survive and continue.

What are Santa María’s main contributions to golf on the Costa del Sol? What are its strong points?

We believe our course here is one of the top ones on the Costa del Sol, because we provide everything needed by golfers to enjoy their round. We maintain golf traditions here, and I’m proud to say we have the best professional staff providing excellent service – they are very friendly and know how to deal with people properly. And on top of that we have one of the best-maintained golf courses on the Coast and a wonderful setting. From the top part of the course you have fantastic views over the Mediterranean.

What is the overall make-up of the club… membership, commercial?

In 2001 we had 550 members but today there are only 170, although this decline has been partly compensated by “pay-and-play” golfers. A significant proportion of the membership, 85 per cent, are British, followed by the Germans, Norwegians and Danish. Members pay an annual fee and can play unlimited golf. Some play as often as 200 times a year!

What have been the main reasons for this decrease in membership?

First of all, the changing economy, and an increase in the number of courses in this part of Spain. The cost of maintenance is very, very high: you have the grass, the staff, the water, everything else. Speaking purely commercially, it is not profitable. But we are happy to continue supporting the golf club and maintaining its quality for the real estate and residents. I am proud that we have always maintained high standards of service. If I ever saw we were not doing that, I would close it. Not that this will happen of course!

How do the official authorities fit into this equation?

You find sometimes that governments, instead of helping us, increase taxes. Just a few years ago they hiked IVA (VAT) from 11 to 21 per cent. When a player comes here and, instead of finding themselves playing for whatever amount, you say 21 per cent more, it’s a lot of money. In words the governments say they want to encourage golf, but in deeds and actions they don’t always help. We stress that it is a sports operation not a commercial enterprise. We would like them to recognise we are not traders; for us it is complementary, something required for the benefit of the whole real estate project.

The authorities are not consistent, especially when it comes to planning and development, and this is annoying investors because they don’t know what to do. They make plans and then a new mayor or a new government comes along and they cancel it and prepare a new plan.

Marbella is one of Europe’s most renowned golf destinations, and the jewel in the crown of Spanish golf – in fact, the municipality with the highest number of courses in Spain. How have you observed its evolution over the past 25 years? In what ways has it improved, and what have been some of the downsides?

The infrastructure has improved considerably – especially the main road access – and there are also more visitors and residents at the higher end, which is good for golf. On the downside, the bureaucratic issues I mentioned before.

The crisis is not over yet, especially in the financial sector. Banks are still suffering because they have financed many of the projects and haven’t recovered all their money. This will take some time. Of course it is not only Spain, as most of Europe has been going through difficult times. If you compare them at the moment, Spain is doing better than Greece, Italy and other places, but they still need to rectify some of the old errors.

The Costa del Sol had a significant increase this summer in the number of tourists but not so much for golfers, because most of the visitors were just sightseeing or going to the beach. The golf high season starts now in autumn, so hopefully we will see some improvement. Maybe, if the euro becomes weaker, more nouveau riche will also come to play.

And specifically for Santa María? Over the next five years, for example, in the lead up to the club’s 30th anniversary?

We will certainly maintain the quality and hope that things improve. I think improvement will come, maybe for future generations if not for us. There will be ongoing growth, nobody can stop that, but the question is how it will affect golf.

Several years ago the town hall overturned its initial approval for an additional nine holes at Santa María (making 27 holes in all) and a practice range. Will you be able to return to that project?

If they reclassify the land there, yes, we’ll do it. It is part of our plan. We spent three million euros just to build a road there, then they said we were killing insects and they wanted to protect them.

On the non-golfing side, do you have more land available to develop?

The whole Santa María project is 500 hectares, and 250 of it is classified as rustic, or rural. Unless there is a boom and the town hall needs more land for property, they will probably leave it classified as rustic. But maybe there comes a time in the future when they will allow us a space, a percentage to develop, 20 per cent for example.

Finally, what about your own golfing game?

These days a shoulder tendon injury prevents me from playing, and I’m also getting old (laughs)! But I’m still fully committed to my annual President’s Trophy, which was held for a 10th year in September in conjunction with the 25th anniversary dinner for members and their families.