Ten-time major winner and World Golf Hall of Famer Annika Sörenstam retired from competitive golf in 2008 after a stellar career as one of the greatest women players in golfing history. Just over a decade later, the Swedish star returned to the Ladies European Tour as tournament host of the La Reserva de Sotogrande Invitational tournament, described by the LET as “part of a bold new vision for women’s golf in Europe”. 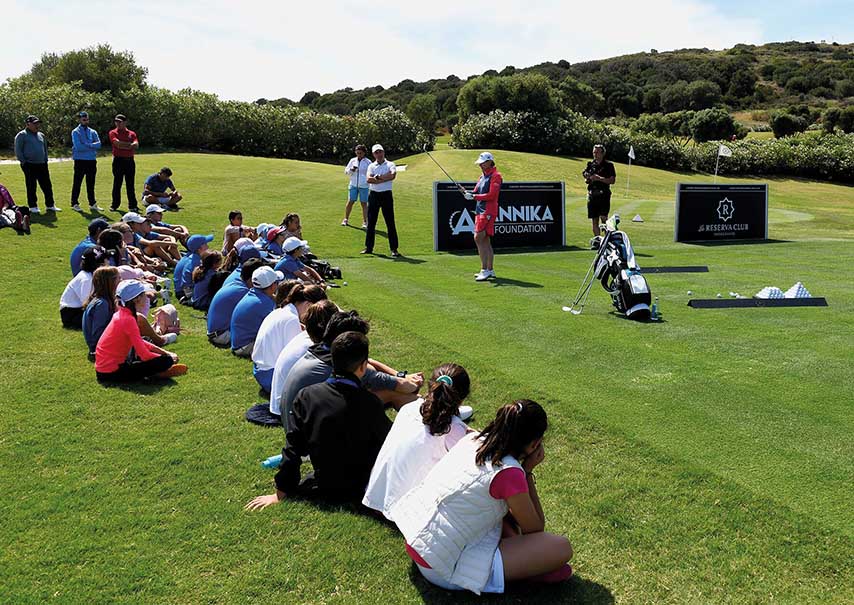 Annika conducted a junior coaching clinic, played in the pro-am and brought excellent media exposure to the event.

During her time in Sotogrande, the winner of 17 LET events, sat down with Andalucía Golf for an exclusive interview…

Oh, I love it. It’s a beautiful place. They (the organisers) got in touch with me about six weeks ago. I had been to Sotogrande, I had been to Valderrama many times, but never La Reserva and I said, send me some information and how can I help you with the tournament - and here I am.

When was the first time you came to the Costa del Sol?

I was here in 1987-88, in Marbella with the Swedish national junior team.

What is it that makes Spain such an attractive destination for travelling golfers, including Swedish?

The weather,  the golf courses, the people, the food, the beaches. I mean, it’s a vacation destination, especially for someone from Sweden, as we don’t have this type of climate all year round. And you have everything literally right here.

The Ladies European Tour celebrated its 40th anniversary in 2018… What do you believe needs to be done to get it back on a more successful track?

I wish I had the answer. I think we all wish it could be in a little bit better state. That’s one of the reasons I’m here. I want to help the tour in any ways that I can, whether it’s to increase the awareness or give it some exposure and be part of it one way or the other. So I think in tournaments like these it’s really important to be on TV, to get exposure, to have companies putting money into it and getting a chance to see the girls and play with them. Many times they are impressed and ask, ‘How can we get involved?’. So I think it’s nice to see that Spain has three tournaments (2019 Ladies European Tour). I hope that other countries in Europe can do their part, that other countries will have a tournament, and hopefully we will have a consistent and regular tour for these players so they can fulfil their dreams.

Why do you think Asian women are dominating the LPGA Tour?

I don’t really know but if you look at some of the South Korean players, especially, they have an amazing tour in South Korea, lots of players, so the grassroots, the golf clubs where they come from, are very solid and only the top ones go to America. When you look at these top players, it’s their work ethic; they work very, very hard, they are very committed, and they are very focused. Their careers are not very long but when they do play they are very good. I would say from a more specific point of view, their swings are excellent; they’re just very fundamentally good. It’s amazing to see, so we have to learn from that: what can we be doing to be more competitive? 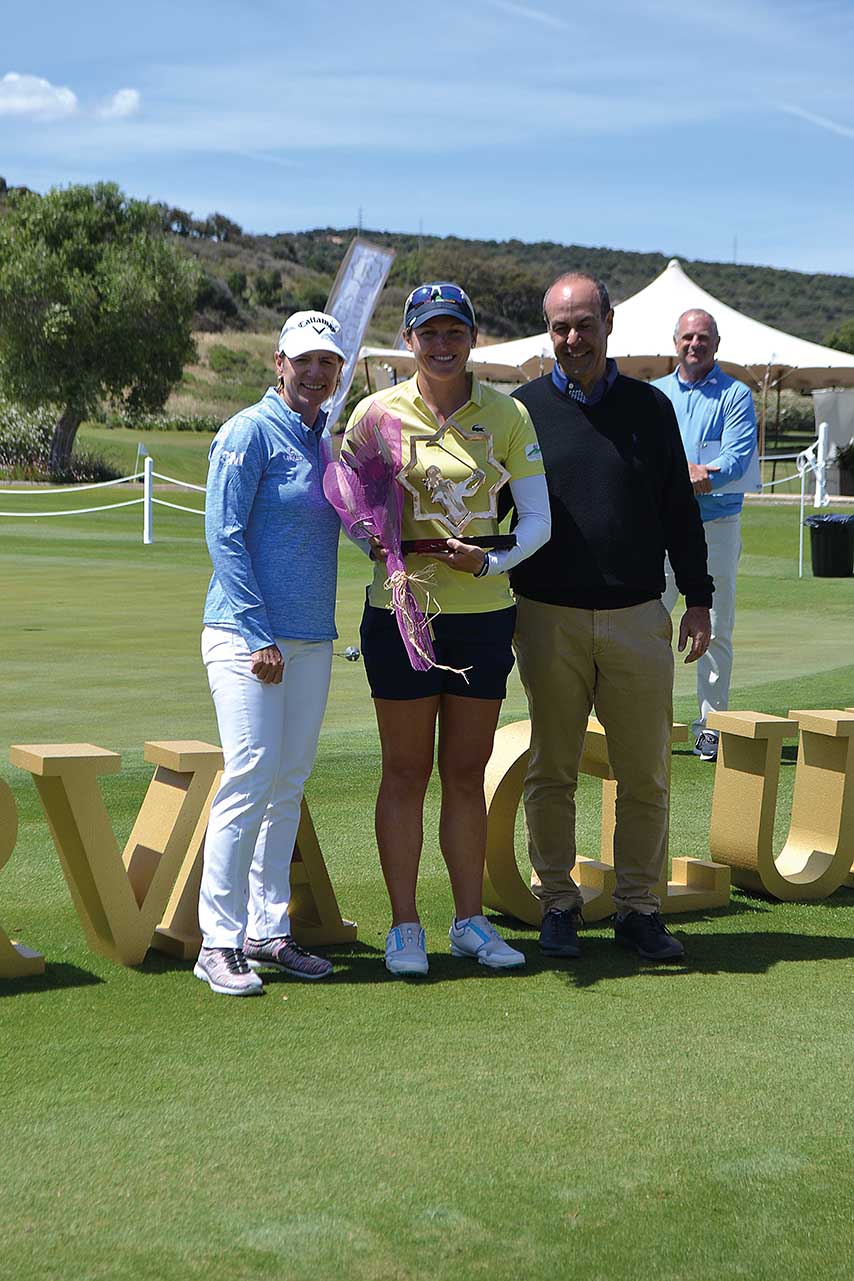 Tell us about your clothes for women, for Cutter & Buck. What do you think are its main attractions?

We started in 2004, when the first collection came out, so next year will be 15 years. There are a few things I like it to stand for. It needs to be good quality, it needs to be athletic, it needs to be feminine, and it needs to be innovative as far as far as fabrics are concerned, and I think we have been very consistent with the way we have done all that. Now we are starting to expand internationally and I’m very pleased with that. I wear it for a lot of things, as we’ve moved away from golf gear to more of a lifestyle style. Obviously I wear logos but if I didn’t I could wear this to go shopping or to a yoga class or something like that, so I think the consistency and the quality has been very good.

What are your foundation’s main objectives in 2019, and the greatest challenges it faces in achieving those objectives?

We started in 2007 so we in our 11th year. It’s all about providing opportunities for young players - young girls especially, aged six to 22 through college. We have different initiatives, for the younger ones, invitationals for the mid-ages, then college events, so the goal is to create playing opportunities for them, and inspire them to play better. The goal is to increase participation among junior girls. Fifteen years ago, about 15 per cent of all juniors were girls. Today we’re at 34 per cent, so that’s one-third, and we’ve doubled the numbers in 15 years. I’m hoping that in 10 years we can be at least over 40 per cent. There are always hurdles but I also feel that we have some good momentum, because people are spending more time on girls’ sport. We now have seven tournaments around the world, in Europe, the U.S., China, Argentina and New Zealand, and it’s been fun. We have over 600 girls every year, including 25 of them playing this week, who have played in Annika initiatives. Our goal is to continue inspiring girls all around the world.

What has been the most satisfying aspect of your transition from player to entrepreneur and philanthropist?

I feel very lucky to be a mum. We have two kids, my husband and I, so that’s been a very important part of my life. I think because I’m happy doing that I feel like I can give to the philanthropy aspect of what I do, and I also do the entrepreneurial aspect as well. It’s been a good balance. Sometimes it’s been a lot of foundation, sometimes it’s lot of course design, depending on the year, and then I also mix it with my family, so I wake up in the morning and there’s always something fun to do. 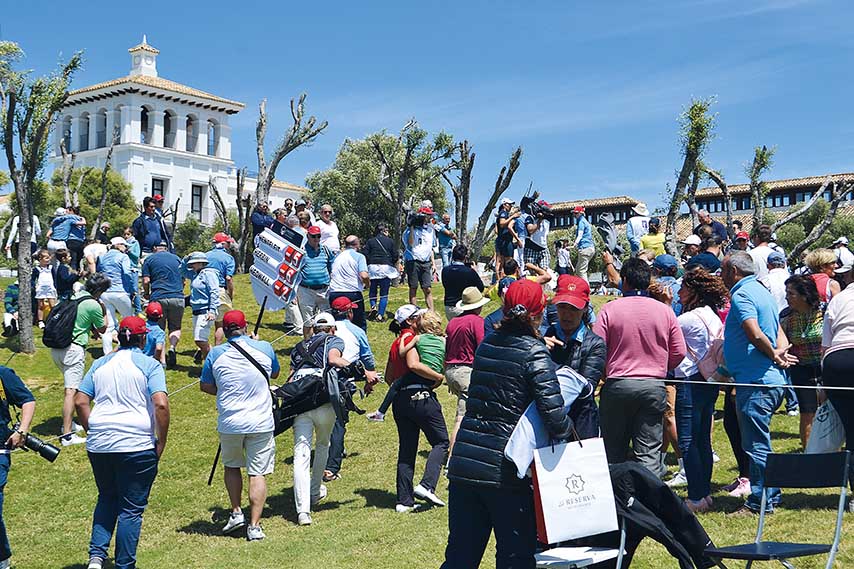 If one or both of children told you they wanted to become a professional golfer, what would be your response?

I will support them whatever they do. Our goal is to introduce them to a lot of things, and then I want them to pick what they like and then I would support them with that. How could I say no when, without golf, I wouldn’t be here today? So I’m not going to deny them that opportunity. It’s difficult as it is with anything. You’ve got to work hard and practise, but you have to do that in anything you do in life.

Your brand statement is “Share My Passion”. What would you say to a non-golfer who is reticent about taking up the game, to instil that “passion” in them?

I would tell them that golf is an amazing game. Golf is a game you can play all your life; it’s a game for men and women, old and young; it has a lot of benefits, not only from a social perspective, having fun and having a drink after the game, but also out on the golf course it’s a healthy sport. A lot of statistics have been presented recently, talking about golf’s benefits for health, lower cardiovascular disease risks, for example. It’s also a mental game, strengthening you mentally, and it’s just healthy in general, so it has a lot of benefits. It’s never too late to start. It’s a game you can start now and you can play all your life.

You are a U.S. ambassador for the Make-a-Wish Foundation. If you could make your own wish for the future of the women’s game, what would it be?

I would just love to see more opportunities for women, obviously for girls, to play. That would be my wish, and that is what we are working on. I would also like to say that the Augusta National Women’s Amateur event (launched this year) is one of those things that you want to see more of.

Would you consider playing competitively again in senior events when you turn 50?

As for the future of golf in general, what are your views about the crisis in golf participation?

I don’t know the statistics around the world or for Europe, but I do know those in the U.S. because I’m part of the National Golf Foundation - and it’s been very steady for the last five years. What’s interesting is that there’s interest but we don’t know how to capitalise on that, what we call on-course participants and off-course. I’m talking about driving ranges, golf simulators and Topgolf, which has skyrocketed. So somehow we have to bring those golfers to the golf course. We have almost 50 million people doing some kind of golf activity, and then you add people who watch golf, so there’s about 100 million in the U.S. How can we get more of them to play golf? It’s a start to get them interested in golf, but I think we need to start looking at golf itself. It’s not just playing 18 holes: golf could be a lot more than that.