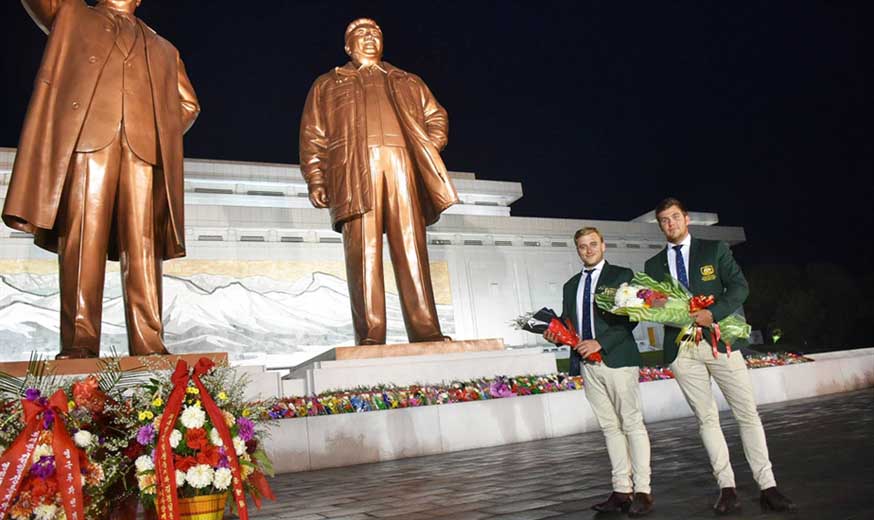 The story made headlines around the world but doubts have been expressed about its complete veracity. According to 28-year-old Brisbane businessmen Morgan Ruig and Evan Shay, they were in China playing polo when they heard about the North Korean Open, sent an email to enquire about playing and received a reply asking if they were the “Australian team”.

“We didn’t say no,” said Ruig. "We just emailed them really,” Shay told Daily Mail Australia. “I don't think they're massive on the internet over there so I don't think they had many opportunities to research. We didn't think we'd actually be accepted."

Nine News took up the story…

“The plucky duo had to surrender their passports to officials when they entered North Korea but enjoyed plenty of perks as honoured guests. They were taken on official visits around the capital city of Pyongyang, and pictures show them standing next to statues of the country’s dictators Kim Jong-Un and Kim Jong-Il with bouquets of flowers.

“The Brisbane men were chaperoned around for the entire five-day trip as part of the conditions of their travel. However, the pair’s poor golf skills were exposed playing in the two-day tournament at Pyongyang Golf complex, North Korea's only golf course. The event attracted 85 international players, many playing off a scratch handicap or single figures.”

Meanwhile, another version of their exploits has been published by GolfLink in Australia.

“The only golf tournament staged in North Korea each year is, in fact, an amateur event. Or more accurately an adventure holiday which includes a one day golf ‘tournament’ and is open to any golfer of any ability level from anywhere in the world (except South Korea).

U.K.-based company Lupine Travel have been hosting the Democratic People’s Republic of Korea Amateur Golf Open at the Pyongyang Golf Complex since 2011. In its now six-year history, the title has been won by players from five different nations, two of those victors sporting a handicap of 22. This year’s tournament was held on October 8-9 and won by Polish 10-marker Lukasz Tomiewicz.

“None of which seems to have been recognised either by the men themselves or any of the news outlets running the story.”