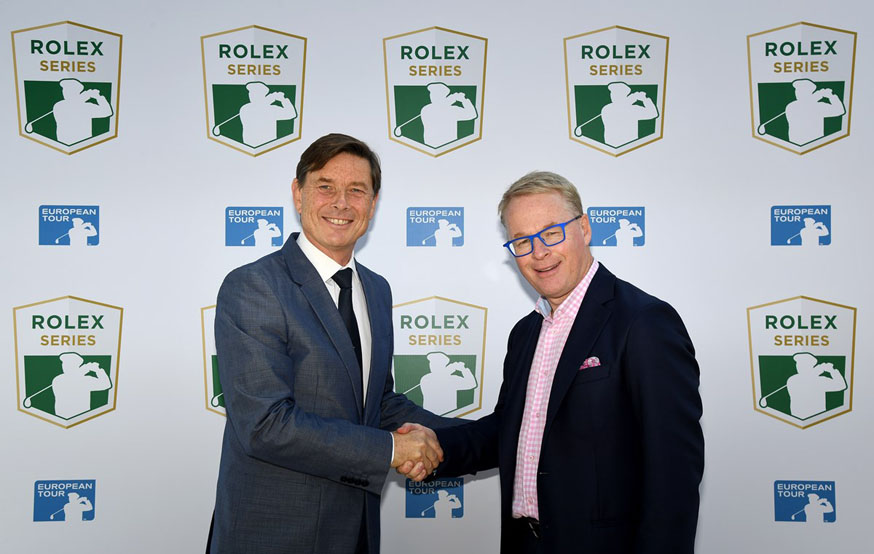 The European Tour has decided to replace its current season finale with a new international series of seven events. In 2017 the Race to Dubai final series will be scrapped and the Rolex Series launched in its place: “a minimum of seven tournaments in seven iconic golfing locations across the world, all offering minimum prize funds of US$7 million, with the DP World Tour Championship in Dubai featuring a prize fund of US$8 million”.

According to the Tour, plans are also in place to increase the number of Rolex Series tournaments in future seasons as part of the multi-year commitment made to the European Tour by the Swiss watchmaker.

The 2017 Rolex Series will begin in May with the BMW PGA Championship at Wentworth Club in England and will be followed by two tournaments in July: the Dubai Duty Free Irish Open hosted by the Rory Foundation at Portstewart; and the Aberdeen Asset Management Scottish Open at Dundonald. The fourth tournament will be the Italian Open at the Olgiata Golf Club in Rome in October; and the final three will be in November (all comprising the current 2016 final series), the Turkish Airlines Open at Regnum Carya Golf and Spa Resort, the Nedbank Golf Challenge at Sun City in South Africa and the DP World Tour Championship in Dubai at Jumeirah Golf Estates.

The Tour has also announced the establishment of a new Access Series which will run concurrently with the Race to Dubai but exclude money earned at the most lucrative tournaments of the European Tour season: the seven Rolex Series events, the Masters and US PGA Championship and the four World Golf Championships. “Money earned at The Open and US Open Championships will be included as all members have an equal opportunity to pre-qualify for those tournaments.” The top 10 on the Access List at the end of the season, not otherwise exempt from the final Race to Dubai, will retain their cards for the following season, which means the number of players retaining full membership from the Race to Dubai will be reduced from 110 to 100, and the Access List players given a category immediately below the top 100.