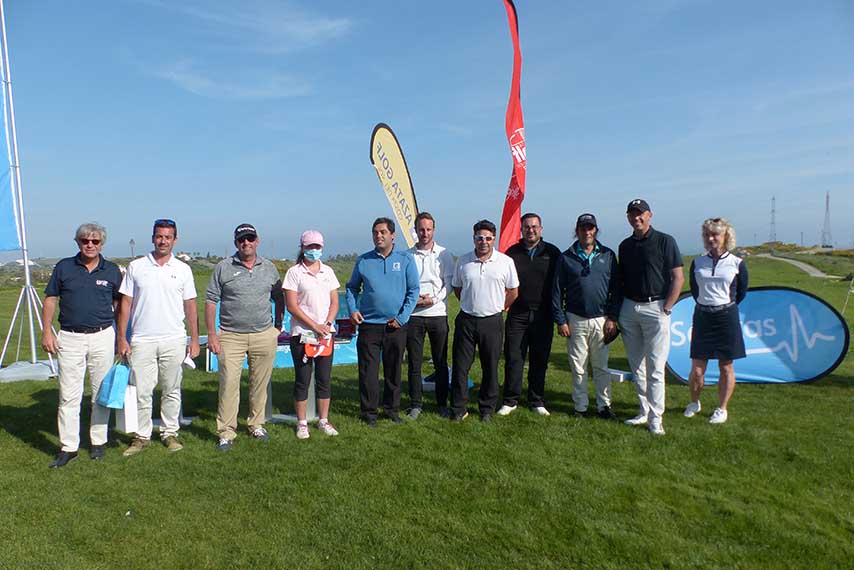 Azata Golf was the setting for the first leg of the 11th Andalucía Golf Challenge-Destination PGA Riviera Maya Bahía Príncipe Circuit. Inaugurated last summer, and the only course to have opened on the Costa del Sol in the last 10 years, the Estepona layout offered superb playing conditions. Participants were especially impressed by the technical challenge of a course designed by Sterling and Martin Golf Course Architects, as well as the magnificent state of its greens – some of the best on the Costa del Sol, according to several players.

Played subject to strict COVID protection controls stipulated by the Royal Andalucian Golf Federation, the tournament proceeded in a pleasant golfing environment, with sunny weather, moderate temperatures and some wind during the day.

Halfway through the round, El Gamonal Restaurant served a snack, and at the end of play participants enjoyed a tasty paella on the clubhouse terrace. In accordance with COVID protocols, tables of four people (only those who had played together), and more than two metres apart, were set up. (SEE PHOTO GALLERY AT THE END OF THIS REPORT.)

The scratch winner and top three finishers in each category received trophies and prizes including clothing from the Fairway + Blue boutique in Puerto Banús, presentation boxes of Enate wine from D.O. Somontano, and a dozen Bridgestone balls from Holiday Golf Group. The winners of special prizes for longest drive (male and female) and closest to the pin were rewarded with boxes of Enate wine, Fairplay + Blue clothing and Zero Friction gloves customised with the circuit’s logo. There was also a gift raffle for dozens of balls, caps, gloves, two gift vouchers from Fairway + Blue, four green fees to play at Azata Golf, and a therapeutic massage and biomechanical evaluation at CostaSpine, a clinic in Marbella specialising in the diagnosis, treatment, rehabilitation and prevention of neuromuscular-skeletal system disorders.

Francisco Savio led the way in category one with 36 points, followed by Juan Francisco Lazo and Juan Francisco Guerrero (both 35 points). The top three players in category two were Marcelo Cabrera (39 points), Philippe Jansen and Armando Peña (both 37 points).The scratch winner was José Ugía (35 points), while the prize for closest to the pin was won by Francisco Huertas and for longest drive by Karina Budantseva and Carlos Cardona.

Jacobo Higuera tallied 35 points in category one but by mistake handed in an incorrect card with 36 points, which would have secured him second place and 10 points for the ranking. He himself noted that the card must have been wrong and, after making the appropriate checks, there was no choice but to disqualify him. In any case, this was an admirable example of honesty and sportsmanship.

Azata Golf was the first of the 25 scheduled tournaments that will make up the 11th edition of this open amateur circuit organised by Andalucía Golf/España Golf magazine. Between March and October, the circuit will continue in the Andalucian provinces of Málaga, Cádiz, Almería, Sevilla and Granada, as well as in Madrid and Segovia, with most of the events taking place on the Costa del Sol.

The grand finale, which will decide the five winners of trips to the Mexican Caribbean, will be held at Marbella Club Golf Resort on 2 October, followed by a gala dinner at El Gamonal Restaurant in Marbella.

Access to the final will be secured directly by the scratch winner of each tournament, while the rest of the places will be awarded based on a ranking of points obtained in each event.

The next event will be on Saturday 20 March at Bellavista (Huelva). ENTRIES

The grand final will decide the winners of five all-inclusive one-week trips to the Bahía Príncipe resort in Riviera Maya (Luxury Akumal Hotel), with golf rounds at PGA Riviera Maya, El Camaleón Mayakoba, Playa Paraíso and Gran Coyote. The top two players in each category and the scratch winner of the final – to be played at Marbella Club Golf Resort on 2 October– will travel to the Mexican Caribbean. 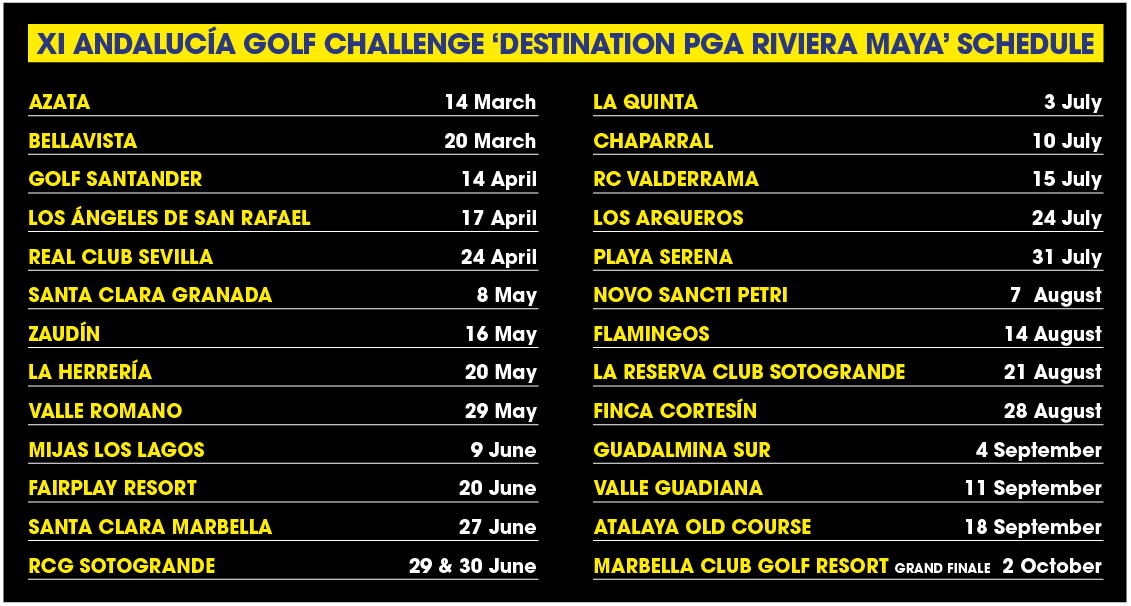