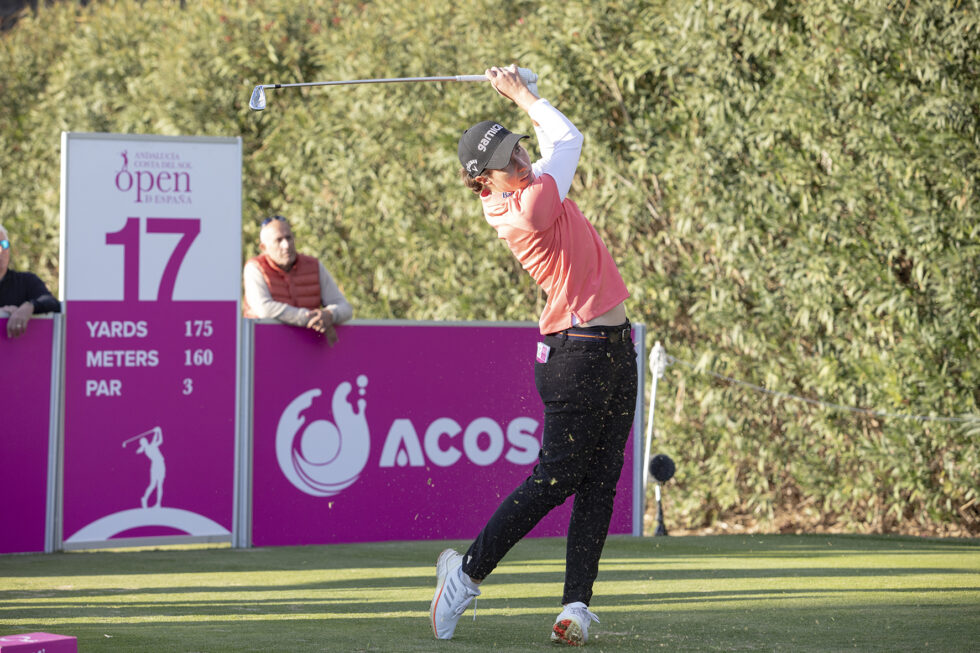 Though it wasn’t the most straightforward of rounds for the Solheim Cup star, who got off to a blistering start with three birdies in her opening four holes.

However, she followed that with three bogeys and made the turn in 36, but three birdies and one bogey on the back nine ensured the four-time LET winner remained at the summit of the leaderboard.

“I’m very happy, I think shooting under par today was as good as shooting six-under yesterday. I think it was a very tricky day, very windy and very tough. This course is tricky with the wind so I’m very happy with the way I handled myself and the last three holes,” said Ciganda.

“I thought today if I could get to 10-under, it was a great score. It started great with three birdies in the first four holes but then one bad tee shot and one short putt – anything can happen with this golf course. I tried to keep hitting good shots and keep focused and I think we did a great job.”

Ciganda will play alongside 2021 Race to Costa del Sol Champion Atthaya Thitikul in the final round with the teenager moving up to second place and the Spanish star is excited to tee it up with Thitikul again.

She continued: “I played with her [Atthaya] in Saudi, she’s a great player who is very consistent. She has won the Race to Costa del Sol by a mile so that says something. I think it will be a good day and I will try to focus on doing my thing and hopefully it is good enough.”

Thitikul carded the round of the day, a 67 (-5), rolling in six birdies and one bogey to climb up the leaderboard and sit three shots behind Ciganda on seven-under-par.

“I’m trying to beat myself every single day because I know I had a pretty good shot every day I just missed a couple of putts but today I gave myself a lot of chances and made more putts than the last two days,” said Thitikul.

“I’ve got used to playing in the wind and hopefully I can learn from it as well because it can destroy your game too, but it’s getting better than it was before.”

On the prospect of a battle with Ciganda on the final day, Thitikul was her relaxed self and is sticking to what she knows best.

“Everyone wants to win the tournament, she’s an LPGA player and she’s playing fantastic golf so let’s see who will get the win tomorrow, but I’ll just focus on my game,” she added.”

Sweden’s Maja Stark and Finland’s Ursula Wikstrom sit next on the leaderboard in a share of third place on five-under-par.

Two-time LET winner Stark got off to a bad start on day three with a double bogey but rolled in three birdies on the rest of the front nine.

Two bogeys and four birdies on the back nine, including two birdies in the last three holes, meant the Swede carded a 69 (-3) to move into third place.

“It was a rollercoaster day, I started off poorly on the first – I miscalculated with the wind, so I hit it past the green then hit a bad chip, so it rolled down again before a two-putt,” said Stark. “It was probably one of the best putting rounds of my life, I messed up a little bit on one of the holes but overall, it was pretty good.

“Tomorrow I’m just going to go out and try to make some more birdies, I know I’ve got to win it to make it into the top five of the Race to Costa del Sol rankings so that’s what I’ll be going for.”

Wikstrom produced another solid day with a round of 71 (-1), which included three bogeys and four birdies, to join Stark on five-under-par with one round left.

“Today was a windy one, pretty similar to the first day – making it harder to get to the pins, everything was a bit tougher but mostly it was OK, there were no big mistakes apart from my putting at the beginning of the round for the bogeys, but otherwise I played a solid game,” said the Finn. “It’s always nice to be in contention and challenge yourself to be in those places, that’s why we are here.”

Spain’s Fatima Fernandez Cano sits in solo fifth place on four-under-par – six shots back from compatriot Ciganda – after a round of 75.

In sixth place is Australia’s Whitney Hillier, who followed her 72 and 70 on the first two days with a 71 in round three to be three-under-par.

While four players are in a share of tenth place with Spanish duo Laura Gomez Ruiz and Ana Pelaez and Swedish pair Caroline Hedwall and Lina Boqvist all on one-under-par.