He subsequently travelled to England where he worked at the David Leadbetter Academy. On his return, he created the Sotogrande Junior Golf School, where players who went on to become top professionals have been coached.

Always linked to education, in 2010 he became involved in an international project in Sicily, where he was closely associated with Italy’s national teams and coaches.

With a masters degree in management and golf course management, David worked in golf operations for Andalucía’s leading courses until, in 2018 the Villa Padierna opportunity arose. The “TGA Golf Academy by Michael Campbell” is a vibrant project that is growing day by day, and currently is recognised as among the best golf academies in Spain.

Shots Hit on a Slope at Different Heights

One of the most common comments among a group of golfers is the following: "On the practice range I hit the ball really well, but when I go out on the course it’s not the same."

It is true that there are many factors that can cause this to occur, However, above all else is the fact that the ball is not always at the same height as our feet, as it would be on the driving range, and this can greatly influence the resulting shot.

As always, I aim to give you the keys to achieving a winning result from this situation, which can often cause difficulties during your round of golf.

Ball Lower than the Feet

This is possibly one of the most difficult shots in golf, but I will try – with these tips – to help you achieve more control. 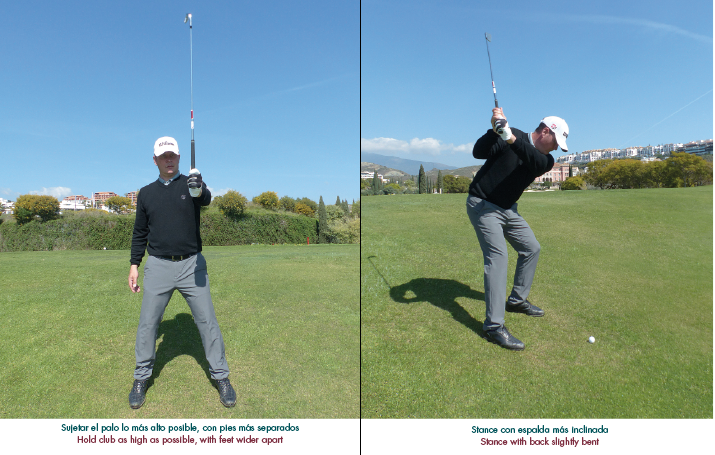 1. You hold the club as high as possible.

2. With the objective that your body is closer to the ball, do these three things:

- Separate the feet a bit more.

- Bring your shoulders closer to the ball, with your back leaning slightly.

3. The hands will be somewhat higher, and this will modify the angle of the shaft (more vertical) and the face of the club will be aiming more to the right. 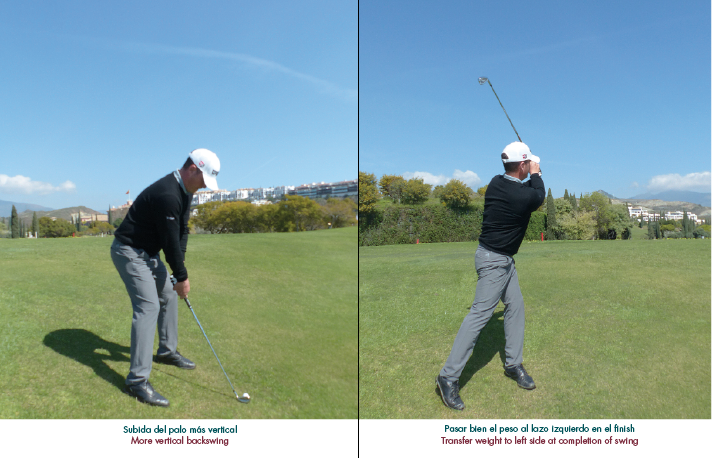 In the previous point I noted that you should bring your shoulders closer to the ball. How does this affect the shot?

- Your rotation will be limited and you will not be able to force a full club swing.

- The more inclined the back is the more this will create a posture that helps you place the angle of the club in a more vertical position. A good trick is to keep your right arm above your left while raising the club.

What do you do?

In order to maintain the correct posture without lifting your body during the backswing, you make a maximum three-quarter swing and therefore use a longer club.

It is true that, at a very high percentage, when we hit a ball that is lower than our feet we usually create a fade effect, although this is not always the case.

This is the most difficult aspect of the shot, as it requires a lot of weight and speed control.

Always try not to overshoot on the upswing to avoid lifting your body. This will help you achieve good rotation and maintain your weight on the left side – without blocking.

Don't worry if you lose your balance forward a bit after hitting the ball, but never backwards. Sometimes by trying to stay still you tend to block, and therefore mishit the shot.

Without ever decelerating on impact, make a relaxed and “non-aggressive” swing. That is key to ensuring this moment of the swing is properly controlled during its execution.

For this stroke, unlike others, you need to hold your posture a little longer before disengaging.

Ball Higher than the Feet

This shot is slightly less complicated than the previous one. The reason is that, technically, there is not much of a difference from hitting a shot off flat ground, although it can be difficult if the slope is more pronounced.

A significant percentage of the time, due to the angle you need to position the club, the shot will be with a draw, so you have to remember this and aim with your shoulders to the right.

1. Hold the club a little lower down.

2. With the objective of adapting your body to the slope, do these three things:

- Place your feet with the toes slightly open.

- Bend your legs less than in a normal posture.

- Position your back a little straighter.

3. Your hands will be slightly lower than usual. This modifies the angle of the club shaft and in turn makes the clubface point to the left (the shorter the club, the more to the left the clubface will be).

As with the stance, the backswing needs to be adapted to the slope you find yourself on. In the case of a slope where the ball is higher than the feet, you do the following:

• Lift the club a little flatter. A good trick is to keep the right arm slightly lower on the backswing than the left arm.

• Body twist is important: remember that shoulder rotation is key.

• Feel your weight slightly on the tip of the feet during the backswing.

We have talked about having a good posture in the stance section, and good rotation with the backswing – both important factors.

Now, referring to the downswing, I want to focus on the swing line.

Think that this shot has every possibility of travelling with effect to the left and, if you don’t want your lovely draw to become a pull-hook, you will need to:

- Always direct the club outwards, never in line with the target and certainly not to the left of it.

- Play a practice swing with the aim of removing a small divot to the right of the target.

1. Modifications to the stance:

- Build a good stance. If you don't have one, it is practically impossible to control these shots.

- It will always be easier to make modifications to the initial position rather than to the swing.

- Both when the ball is lower than the feet and when it is higher, play several practice swings while brushing the ground or removing small divots. These are shots that require a lot of precision on impact, and several practice shots helps you position yourself correctly behind the ball.