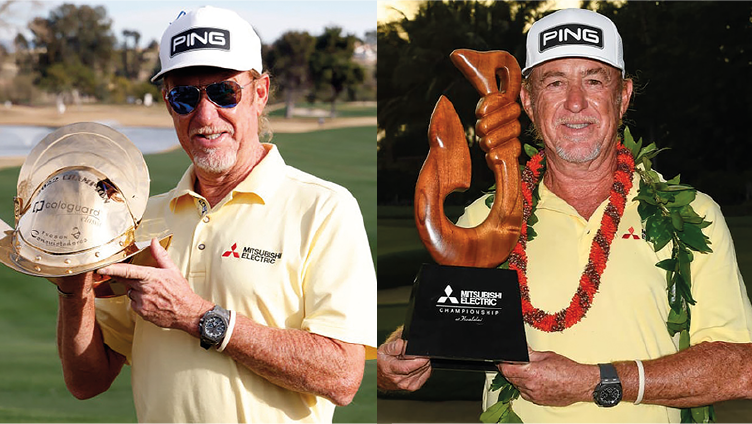 Celebrating birthdays certainly must feel great for Miguel Ángel Jimémez. On 5 January he turned 58, and he began a new US Champions Tour season like never before: two victories in his first three events, including a pair of holes-in-one during the latter. Can anyone top that?

For the Málaga-born global star, it was his 12th victory on the Champions Tour, achieved after a superb performance at the Cologuard Classic, held at the Omni Tucson National Resort in Arizona.

He had secured his 11th US seniors victory one month earlier, at the Mitsubishi Electric Championship at Hualalai, the tournament that kicked off this year's Champions Tour. And, in his second tournament, the Chubb Classic, the week before his second win, he was fifth. During those first three events on the 2022 Tour he pocketed almost $700,000.

Jiménez’s 12th title came after he carded 66, 67 and 65 at the Catalina Course, for an 18-under total of 198, including some truly stratospheric statistics: 16 birdies, an eagle, four bogeys and, most strikingly of all, two holes-in-one.

He scored his first ace on the first day of the tournament at the 7th, a 190-metre par-3, and repeated the feat in the third and final round at the 14th, also a par-3 but somewhat shorter at 170 metres.

If we take into account the fact that some studies estimate a professional has a 3,000 to 1 chance of making a hole-in-one, it is clear that Miguel Ángel Jiménez has started the year on an exceptionally sweet note.

Faced with such a torrent of excellent play, there was little the rest of the field could do. Only American Jeff Sluman managed to match Jiménez's card after the first day and share the lead, but it was short-lived. Those who finished closest to the Spaniard after 54 holes were another American, Woody Austin, and Germany’s Bernhard Langer, who shared second place four shots back.

Looking back over a remarkably stellar Champions Tour career (so far), Jiménez opened his winning account in his first appearance among the 50-plus brigade, at the 2014 Greater Gwinnett Championship, and he went on to secure his second win at the 2015 Mitsubishi Electric Championship.

A year later, in 2016, he won the Mississippi Gulf Resort Classic, a success he repeated in 2017, when he beat American Gene Sauers in a thrilling play-off.

Subsequently, in May 2018, he won the Regions Tradition, the first majors title achieved by a Spaniard in the senior ranks. At the beginning of July that same year he went agonisingly close to also winning the US Senior Open Championship, ultimately being thwarted by American David Toms.

A few days later, Miguel Ángel Jiménez further consolidated his legend with a magnificent victory at The Senior Open, another one of the majors co-sanctioned as part of both the Senior European Tour and the US Champions Tour.

The start of 2019 was also extremely fruitful for the Churriana star, as he won the Chubb Classic before going on later in the year to secure another victory at the Dominion Energy Charity Classic.

During the 2020-2021 season, Jiménez added two more trophies to his trophy cabinet: the Mitsubishi Electric Championship at Hualalai and the Sanford International.