On 13 October 2020, the long and eagerly-awaited news was announced: the Ladies European Tour (LET) revealed that day that Spain would host the 2023 Solheim Cup at the spectacular Finca Cortesín on the Costa del Sol. The United States and Europe will be facing up in Spain for the first time in the history of the tournament, a milestone that once again places the country in the forefront of golf and adds to the long list of top-level international events held on Spanish soil.

After the European team's away victory by 15-13 in the most recent edition, played last year in Ohio, they will be aiming to achieve a third consecutive win against the Americans. The latter still lead their rivals by three victories (10 to seven) in the overall tally for this biennial tournament created in 1990 – which in 2021 registered a record attendance of 130,000 spectators at the Inverness Club.

Although Spain will be making its debut in organising this prestigious international women's team competition, the country has a long history as the host of high-level golf events. These include the 1997 Ryder Cup and nearly 80 LET and the LET Access Series tournaments, highlighted most recently by the grand finale of the LET schedule since 2020, the Andalucía Costa del Sol Open de España, which also determines the final order of merit, the Race to Costa del Sol. Later this year (24-27 November) it will be held at Alferini, one of three courses at Villa Padierna Golf Club.

Now that the threshold of 500 days has passed until the Solheim Cup 2023 is held, special events to promote the event are continuing their course, with one date especially marked on the calendar: 18 September 2022. On that day it will be exactly one year before the tournament starts, and it will be the perfect time to celebrate another stage before reaching the finish line: “One Year to Go”, an event that is already being planned and which will take place in several sessions in three municipalities – Casares, Marbella and Benahavís.

Until that date arrives, other 2023 Solheim Cup events and initiatives are being held throughout  Spain, and they will continue to have the strong support of organisations, institutions and federations plus, of course, the invaluable work of more than one hundred volunteers.

As Francisco Salado, president of the Diputación de Málaga (provincial government) and Costa del Sol Tourism, has pointed out, securing the 2023 Solheim Cup is “a dream come true”.

The 2023 Solheim Cup, an event officially designated to be of exceptional public interest, is sponsored by Costa del Sol, PING and Rolex as global partners; and by the regional ministry of tourism, Acosol, Marbella Town Hall and Benahavís Town Hall as official partners.

LET Announces Solheim Cup to be Held at Finca Cortesín

One day after Spain celebrated its National Day, it was announced that Finca Cortesín would host the 2023 Solheim Cup. “Finca Cortesin is a world-class venue and deserving host of the 2023 Solheim Cup as it takes place in Spain for the first time in the tournament’s history,” said Ladies European Tour CEO Alexandra Armas. “The Costa del Sol is truly one of golf’s most exciting destinations and I am sure that the pristine and challenging course design at Finca will be the perfect stage for an exciting match play contest for both players, on-course spectators and fans around the world watching at home.”

The 2023 Solheim Cup was declared to be an event of Exceptional Public Interest by the Spanish government. This designation, applying for the next three years, reinforces its appeal, as companies and institutions sponsoring the competition will be able to obtain a tax deduction of up to 90 per cent of their investments, a considerable tax incentive that should be added to the other benefits of sponsoring an event of this magnitude. It should be also noted that this is the first women’s golf event considered an event of Exceptional Public Interest in Spain, a distinction that highlights the importance of this competition on the international scene.

The Royal Spanish Golf Federation and Deporte & Business (the event’s organising company) launched the Objective 2023 program to improve the performance of elite golfers and encourage competition among young golfers with the option of qualifying for the PING Junior Solheim Cup European team in 2023 – an event to be held on the Costa del Sol as a prelude to the Solheim Cup.

Costa del Sol town Benahavís hosted the presentation of the Club Ambassador Program, an initiative associated with the 2023 Solheim Cup that brought together 40 ambassadors for this international team competition.

The unconditional support of the royal family endorses their commitment to women’s sport and golf as ideal vehicles to convey the best values, in addition to reinforcing the position of the 2023 Solheim Cup. The presidency of the honorary committee of the 2023 Solheim Cup by Queen Letizia is a further reflection of how the main state institutions are in tune with all the entities involved in the organisation of this important event, which will undoubtedly become an ideal ambassador for Spain and, in particular, for Andalucía and the Costa del Sol.

Energy, light, optimism, life, hope, warmth and joy are some of the values transmitted by “Sol”, the official mascot of the Solheim Cup that was presented during a fun event at Costa del Sol club Los Arqueros Golf. The event was attended by Francisco Salado, president of the Diputación de Málaga (provincial government), Benahavís mayor José Antonio Mena, and Alberto Ortiz de Saracho, managing director of of the public company Turismo y Deporte de Andalucía, on behalf of all the entities and institutions that are sponsoring and supporting the next edition of this biennial international competition.

Norwegian Suzann Pettersen was named as the European captain for the 2023 Solheim Cup, during an official venue handover and press conference at Finca Cortesín. The two-time major champion is synonymous with the Solheim Cup, having represented Europe nine times as a player and twice as a vice-captain. She has been part of five triumphs, including the past two victories at Gleneagles in Scotland and at Inverness Club in Ohio. She has collected 21 professional titles across the LET and LPGA Tours, including majors at the 2007 McDonald’s LPGA Championship and the 2013 Evian Championship, yet her most cherished memories have been forged when playing for passion, pride and friends in the Solheim Cup.

FITUR, the international tourism fair held annually in Spain, hosted the presentation of the Solheim Cup Trophy Tour, an initiative that will bring the competition cup to most of the Spanish golf clubs. First stop on the tour itinerary, 11 days later, was the Royal Spanish Golf Federation, where president Gonzaga Escauriaza formally received the trophy. 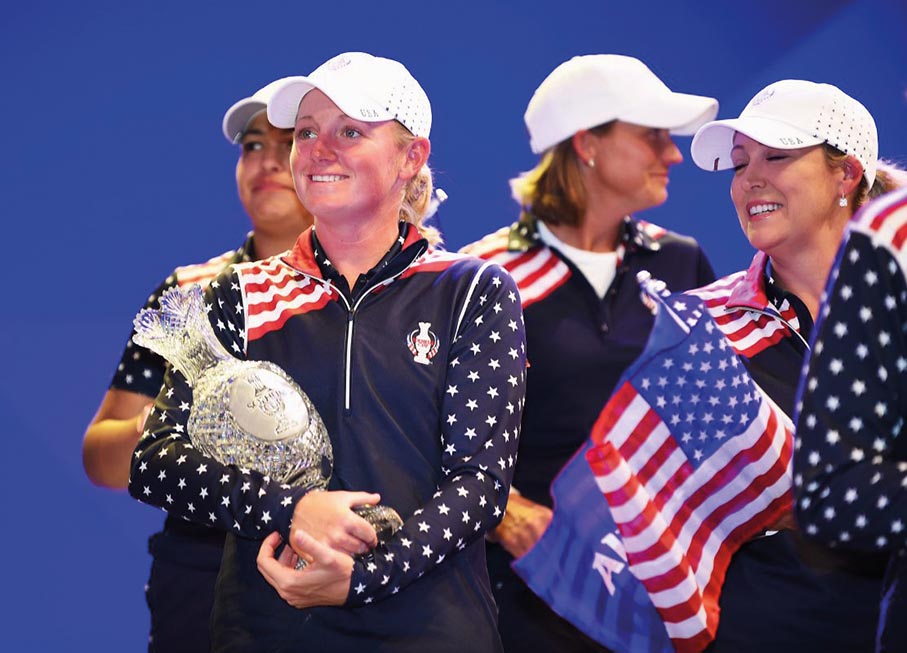 Two-time major champion (2011 Kraft Nabisco and 2013 British Women’s Open) Stacy Lewis was named captain of the US team for the 2023 Solheim Cup. “To be named captain is an incredible honour,” she said. “I have so many amazing memories from my years on the team and the two opportunities I’ve had to work alongside the team. I absolutely love the Solheim Cup and I want 2023 to be as great an experience for my team as my years wearing Red, White and Blue have been for me.”

The LET announced new criteria for European team selection for the 2023 Solheim Cup. The 12 players will be decided based on their positions in two ranking lists: LET points and the Rolex Women’s World Golf Rankings.

The second list will determine six places, the top six players from the Rolex Women’s World Golf Rankings at the end of the qualifying period who are not already qualified from the LET points list. In the event of a tie, placings will be determined in favour of the player with the higher ranking on the LET Solheim Cup points ranking at the end of the qualifying period.

The Old Course at La Zagaleta, in Benahavís municipality, will host the 2023 PING Junior Solheim Cup, a competition for young up-and-coming players held as a prelude to the main 2023 Solheim Cup 2023.

Golf fans are eagerly awaiting the 2023 Solheim Cup. So much so that more than 10,000 tickets had been sold by April. This significant number of tickets purchased, when there was almost a year and a half to go before the event, resulted in a boost to hotel reservations in establishments close to Finca Cortesin.

Anna Cañadó and Paula Martín become the winners of Objective 2023, a program created by the Royal Spanish Golf Federation and Deporte & Business to improve the performance of elite golfers and encourage competition among young players with options to qualify for the European team in the 2023 PING Junior Solheim Cup, a tournament to be held at La Zagaleta’s Old Course in Benahavís, as a prelude to the main 2023 Solheim Cup.