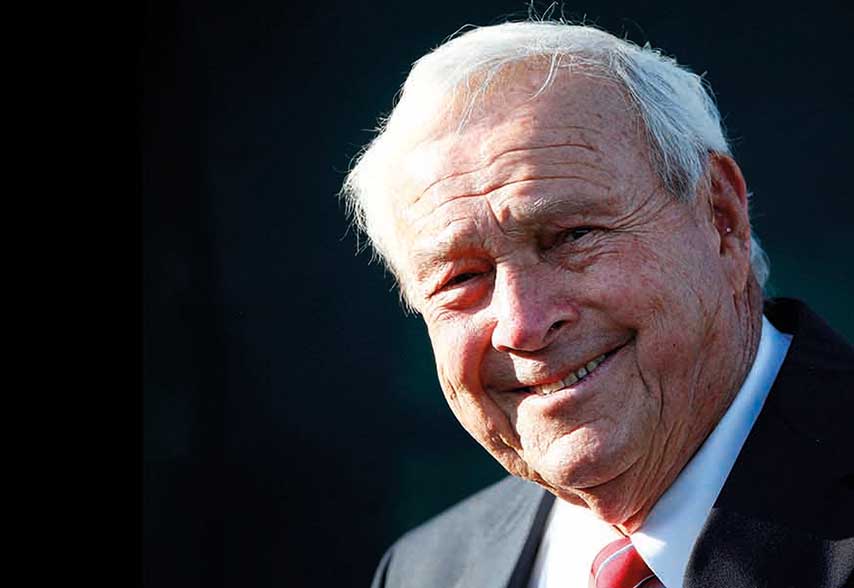 Arnold Palmer – the player universally credited with popularising the game on a global scale – died on Sunday 25 September aged 87, prompting an unprecedented outpouring of grief among friends, colleagues and fans from throughout the world.

Speaking by telephone to Golf Channel, Jack Nicklaus said, "When I heard the news last night, I was just crushed. It just sort of felt like part of my life went with it, which it did. He was such a good competitor, good friend, and so great for the game of golf. He did so much for all of us as it relates to promoting the game, furthering the game, and he did so much for my career as far as being my friend and helping me."

Highlighting Palmer’s selfless nature, Nicklaus added, "I think Arnold would rather have gone to a cocktail party with 100 strangers than out to dinner with two friends. He just liked to give himself to the public and his fans. That was Arnold, and that was his personality. I don't think he ever met a stranger, and that was great."

The IAGTO was among countless organisations adding their condolences. “In December of 2000 we were lucky enough to have the opportunity to present Mr Palmer with our first IAGTO Honorary Award, as the ‘20th Century's Most Inspirational Golfer’. The success of the golf tourism industry is directly linked to the number of people playing the game, and at the dawn of golf's TV age Arnold Palmer had an incredible impact on the growth in both interest and participation. Armchair fans became golfing addicts and we all became beneficiaries of The King's legacy. A wonderful man and a great loss.”

An extraordinary and hugely popular golfer, and a firm favourite among fans right up to his death, Arnold Palmer was the first player to win one million dollars in prizemoney and four US Masters titles at Augusta.

Also known as The King, or simple Arnie, this charismatic player was born on 10 September 1929 in Youngstown, Pennsylvania. He began playing golf at three thanks to his father, who was a greenkeeper. Later he began to reap the rewards of his expertise with a golf club and won the West Penn Amateur Championship. In spite of this and other successes, he left golf for a few years to enrol in the Coast Guard, returning to the game at the start of the 1950s.

In 1954, he achieved his most important victory as an amateur, the national US Championship, and it was clear what the future held: just five months later he turned professional.

After two seasons settling into the Tour, his first big season came in 1957 when he won four times. The following year Arnold won his first Grand Slam title, the US Masters – winning the tournament three more times (1960, 1962 and 1964).

His attacking play, charismatic swing and Hollywood actor’s appearance quickly turned him into a media star. His charisma and TV appeal in the first years when this new communication medium began to become popular helped develop the game and boost prizemoney.

During his long and successful career, The King won seven majors, between 1958 and 1964: four Masters (he was the first player to achieve this feat); two British Opens; and a US Open.

Between 1957 and 1963, Palmer topped the money list four times and won the most number of events five times.

In 1968, he became the first golfer to win a career one million dollars on the US PGA Tour.

His final big year on the Tour was 1971, when he won five times. The last of his 62 professional victories came in 1973, though his popularity never declined among fans.

In 1980, he joined the Champions (Seniors) Tour, and once again his charismatic personality helped further popularise the Tour. Success came quickly: in his first season he won the PGA Seniors Championship and the next year the US Senior Open. In all he collected 10 titles on the Champions Tour.

His experiences in the Ryder Cup had a double facet: he played in the event on seven occasions and was captain twice (the last time in 1975).

Palmer was able to maintain his popularity thanks to featuring in advertisements, and he also established his own company, Arnold Palmer Enterprises, an empire which includes golf academies, and companies organising golf events, managing golf courses and selling sports products and clothes. He was also the co-founder of The Golf Channel. With all these extensive business activities he became one of the wealthiest sportsmen in the world.

Among his many honours, in 1974 Arnold Palmer was elected to the World Golf Hall of Fame.