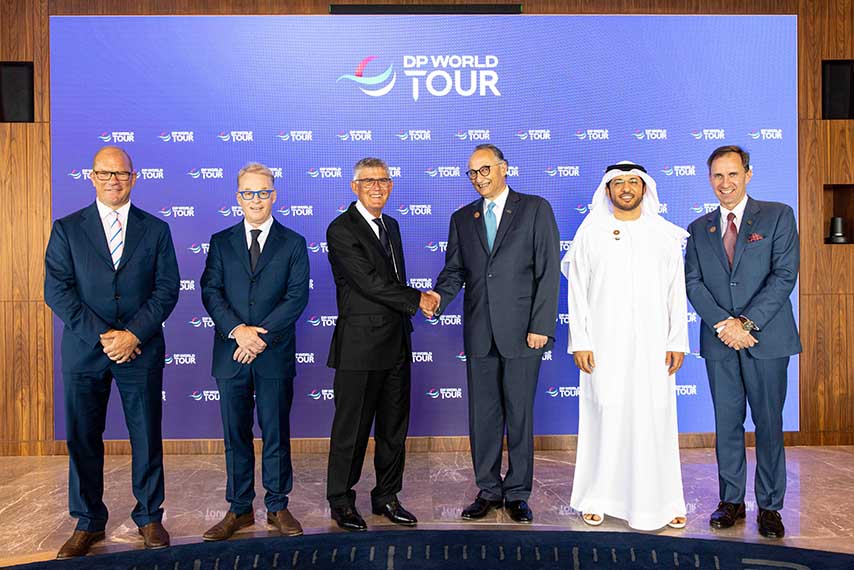 The European Tour group and DP World today jointly announced a ground-breaking evolution to their long-term partnership, with DP World becoming the new title sponsor of the group’s main tour from the start of the 2022 season.

The agreement heralds a new era in the history of the European Tour group, which, along with DP World, will celebrate its 50th anniversary in 2022, the first season of the newly named DP World Tour.

The new look DP World Tour will see total prize money break through the $200 million mark for the first time, with a new minimum prize fund of $2 million for all tournaments solely sanctioned by the DP World Tour.

In 2022, the DP World Tour will represent a truly global tour through an international schedule, that will feature a minimum of 47 tournaments in 27 different countries, including new tournaments in the UAE, Japan, South Africa and Belgium and an expanded Rolex Series comprising five events: the Abu Dhabi HSBC Championship, the Slync.io Dubai Desert Classic, the Genesis Scottish Open, the BMW PGA Championship and the season-ending DP World Tour Championship.

For the first time, it will also feature three tournaments co-sanctioned with the PGA TOUR - the aforementioned Genesis Scottish Open, as well as the Barbasol Championship and the Barracuda Championship taking place in the United States – as a result of the Strategic Alliance between male professional golf’s two leading Tours. To view the full 2022 schedule, please click here.

The European Tour and DP World were both established in 1972 and have since developed into global enterprises with DP World, which is headquartered in Dubai, evolving into the leading provider of global smart end-to-end supply chain and logistics solutions.

DP World’s association with the European Tour spans more than a decade, first becoming a presenting partner of the European Tour’s Race to Dubai finale at Jumeirah Golf Estates in its inaugural year in 2009, before the Rolex Series event was renamed the DP World Tour Championship in 2012. It was in this year that DP World became the tournament’s title partner.

DP World then became an Official Partner of the European Tour in 2015, and they will now become the Official Title Partner of the Tour from the start of the 2022 season, which begins with the Joburg Open in South Africa, from November 22-25.

Keith Pelley, Chief Executive of the European Tour group, said: “Today’s announcement is undoubtedly a momentous one in the proud history of our Tour. The launch of the DP World Tour in 2022, coinciding with both of our 50th anniversaries, will herald a new era in global golf, and crucially it will benefit everybody involved – all our players, caddies, fans and partners – as well as making an important contribution to wider society.

“The entire ecosystem of our Tour will be strengthened because of this hugely significant deal, and that was essential to us and to DP World, who have been an incredible supporter of our Tour as well as golf more widely, from grassroots through to the elite professional game.

“The DP World Tour is, therefore, a natural evolution of our decade-long partnership, and the presence of ‘World’ in our new title better reflects our global reach.”

Sultan Ahmed bin Sulayem, Group Chairman and CEO of DP World, said: “DP World has been a partner of the European Tour for over a decade. Our long-standing partnership has provided an excellent platform to engage with customers, prospects, and stakeholders, and build our brand. We have relished the opportunity to support the Tour in growing the game of golf and improving access to the sport at all levels. The key to this success has been and will continue to be the shared vision and values that underpin the partnership.

“We both have a global mindset, are committed to inclusivity, and invest in new technologies to stay competitive – attributes which today become the fundamental principles of the DP World Tour. As the leading provider of smart logistics solutions worldwide, we will use our people, assets, and connectivity to help grow the Tour further and change what’s possible in golf.”

Jay Monahan, Commissioner of the PGA TOUR and Board Member of the European Tour, added; “Thanks to the support of long-standing partner DP World, today’s announcement significantly elevates the European Tour on a global basis. We are excited for the continued growth and evolution of the European Tour, as well as the momentum this provides toward our Strategic Alliance. I’ve said before that our respective Tours are positioned to grow – together – over the next 10 years faster than we ever have at any point in our existence, and today’s announcement is another point of proof in those efforts.”

ELEVATE THE TOUR IN EVERY WAY
Biggest prize fund in European Tour history: Overall prize funds in 2022 will be more than US$140 million for all tournaments outside the Majors and World Golf Championships, outstripping the previous all-time pre-pandemic high of US$130 million in 2019. Including the Majors and WGCs, the total prize fund on the 2022 DP World Tour will exceed US$200 million, benefitting all tournaments and all members across all categories.
New US$2 million minimum tournament prize fund: For the first time, every tournament solely sanctioned by the DP World Tour will have a minimum prize fund of at least US$2 million, ensuring that all members benefit from this boosted investment.
A record US$10 million prize fund for the 2022 DP World Tour Championship: This will make the season finale – the final Rolex Series tournament of 2022 – the first European Tour event in history outside the Majors and WGCs to feature an eight-figure prize fund.
A full and comprehensive 12 month schedule: The DP World Tour’s International Schedule for 2022 was also unveiled today and can be accessed by clicking here. It features a minimum of 47 tournaments across 27 different countries from November 2021 to November 2022.

HELP TO GROW THE GAME GLOBALLY
A significant investment in the Challenge Tour: To elevate prize funds and increase playing opportunities, as well as improving the overall infrastructure of events.
Establish the annual John Jacobs Bursary Award: Supporting the top five players on the Challenge Tour Rankings at the end of the Rolex Challenge Tour Grand Final supported by The R&A with their travel and expenses the following year on the DP World Tour.
A commitment to grassroots golf: Promoting golf at all levels in the countries we play in, including the UAE, where the DP World Tour will work closely with the current grassroots programme.

DRIVE POSITIVE COMMUNITY IMPACT
Expansion of the Tour’s ‘Golf for Good’ overarching CSR initiative: Focused on supporting good causes and the communities where the Tour plays; sustainability; diversity, inclusion and health benefits of golf.
Support of Charitable Initiatives and Disability Golf: Such as UNICEF’s COVAX Programme and EDGA European Tour.
Continued collaboration with the women’s game: including support of mixed events such as the ISPS Handa World Invitational and Scandinavian Mixed.

.
About the European Tour group

The European Tour group is ‘Driving Golf Further’ through our guiding principles of being innovative, inclusive and global.

Innovative: We are driving innovation in golf by creating award-winning content, pioneering tournament formats and the use of the latest technology and inventive fan engagement. We have recognised the need for golf to modernise for future fans, and we are committed to engaging new audiences whilst respecting the tradition of our sport.

Inclusive: We are committed to including all who share a love for the game of golf. We are passionate about closer collaboration with the women’s game, disability golf and promoting the health benefits of playing golf.

Global: Since the European Tour was formed in 1972, players from 36 different countries have won tournaments, while our live broadcast reaches more than 490 million homes in more than 150 countries every week, generating more than 2,200 global broadcast hours for each event. We also enjoy the support of many of the world’s leading business brands, with Rolex, BMW, Callaway, DP World, Emirates, Workday and Zoom as Official Partners.

The European Tour group also manages the developmental Challenge Tour and the Legends Tour (formerly known as the Staysure Tour), the men’s professional golf tour for members aged 50 and older.

The European Tour group is also the Managing Partner of Ryder Cup Europe, the body which, alongside the PGA of America, administers golf’s greatest team contest, the Ryder Cup.

About DP World
We are the leading provider of worldwide smart end-to-end supply chain logistics, enabling the flow of trade across the globe. Our comprehensive range of products and services covers every link of the integrated supply chain – from maritime and inland terminals to marine services and industrial parks as well as technology-driven customer solutions.

We deliver these services through an interconnected global network of 181 business units in 64 countries across six continents, with a significant presence both in high-growth and mature markets. Wherever we operate, we integrate sustainability and responsible corporate citizenship into our activities, striving for a positive contribution to the economies and communities where we live and work.

Our dedicated, diverse and professional team of more than 56,000 employees from 140 nationalities are committed to delivering unrivalled value to our customers and partners. We do this by focusing on mutually beneficial relationships – with governments, shippers, traders, and other stakeholders along the global supply chain – relationships built on a foundation of mutual trust and enduring partnership.

We think ahead, anticipate change and deploy industry-leading digital technology to further broaden our vision to disrupt world trade and create the smartest, most efficient and innovative solutions, while ensuring a positive and sustainable impact on economies, societies and our planet.