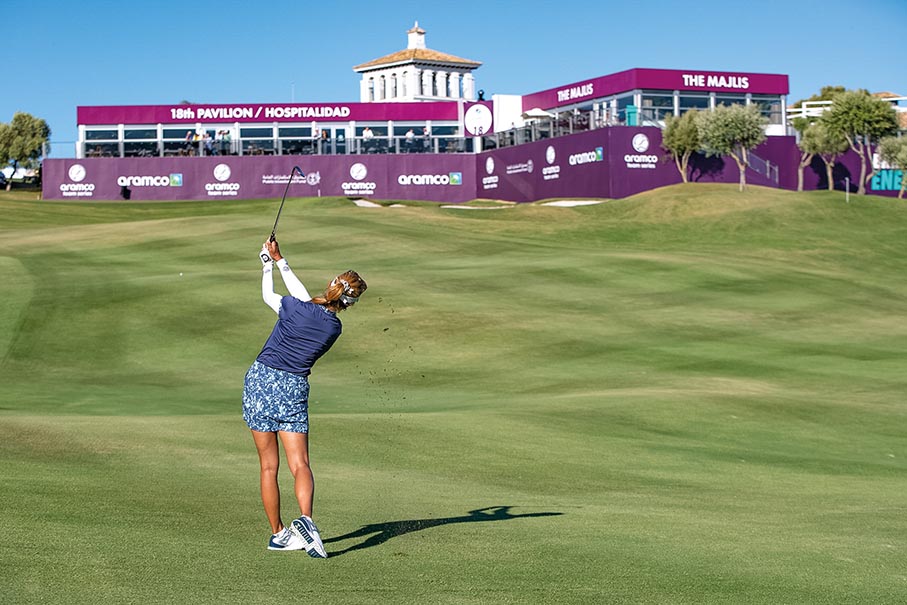 For the second consecutive year, Aramco Team Series, a professional women's golf circuit unique in the world (present in Bangkok, London, New York and Jeddah), and part of the Ladies European Tour, returns to Sotogrande from August 18 to 20.
It is estimated, according to data from the Royal Spanish Golf Federation, that this sport contributes 5,400 million euros annually in Andalusia, which represents 3% of the region's GDP, in addition creates 26,300 direct jobs and 56,000 indirect jobs per year, which makes golf a real economic and tourist engine for the Community.
Aramco Team Series was created with the aim of promoting, disseminating and contributing to the empowerment of women's golf, giving it the place it deserves. In this direction, one of the great attractions of the tournament is the prize, one of the most lucrative, amounting to 1 million dollars, which is intended to contribute to the promotion of women who are professionally engaged in the world of golf.
This great event will be made possible thanks to the great team behind it, some 400-500 people including contractors. There will also be 100 volunteers who will be able to experience and witness our stars playing in the tournament.
Sotogrande will host this great competition, welcoming 108 professionals, including superstars of national golf, such as Carlota Ciganda, current winner of the Estrella Damm, or Ana Peláez, born in Malaga and young promise of golf in our country, among others. But it will also host international players of the stature of the Korda sisters, Anna Norqdvist or Laura Davies, (and a long etcetera), who will not make it easy for our Spanish representatives.
Beyond the strictly sporting aspects, the tournament will take place at the select 'La Reserva' Club in Sotogrande with 90 hectares, where the public and the players can enjoy not only a first-class course, but also a 360 'luxury experience'.

A resort that, for its facilities and location, is a real oasis in the area: 21,000 square meters of indoor beach (one of the largest in Europe), provided with fresh water with sandy bottom, an exclusive 'Beach Club', spectacular views of the Mediterranean, a Golf Course with 45 hectares, or a gastronomic offer, with the possibility of enjoying dishes of Michelin star chefs (for more information, see the webside de ‘La Reserva’), which makes the Aramco Team Series in 'La Reserva' of Sotogrande, as the place-to-be for this summer.