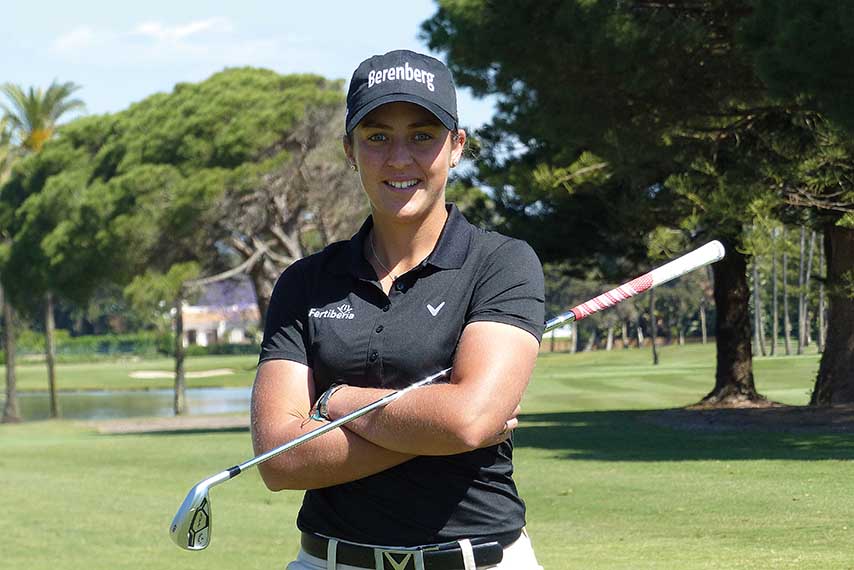 As in golf, life sometimes smiles at you with a few kind blows and at other times slaps you around with a barrage of dire hits. Fortunately for María Parra, the goddess of good fortune usually treats her in a benevolent way, although it is also true that on more than one occasion she has left her in the lurch. Like last December, for example, when because of a bureaucrat at the US embassy in Spain, she was unable to obtain a visa to enter the United States and thus lost an opportunity to regain her card for the LPGA Tour.

Or when, a year earlier, her clubs did not arrive on the flight from Spain the first time she faced that tour’s qualifying school. Luckily, María was able to overcome this unexpected setback, which coincided with her 18th birthday, and she became the only player to obtain 2017 cards to play on both the LPGA Tour and the Ladies European Tour.

Having not been able to access the LPGA Tour school due to the visa incident, the Cádiz-born (Guadiaro) Parra, who in 2016 rose to number two in the amateur world ranking, is playing this year on the Symetra Tour, the second-tier women’s circuit in the US. If her results are favourable this season, she will be able to return to the LPGA Tour in 2019.

During a break in her competitive calendar, at the end of May, María returned home for a few days to be with family and friends, although she did not neglect her preparation: with trainer Juan Antonio Martín, she went regularly to “her” Royal Sotogrande Golf Club.

Always with a smile on her face, the 20-year-old commented on her experience on the Symetra Tour. "It's a very good tour, because it gives you the possibility of returning to the LPGA, and the truth is that I'm quite happy because lately I'm playing very well and that gives me confidence."

She says there is a high level of play on the circuit because many of its members are players who, like her, did not retain their LPGA Tour cards from the previous season. "Tournaments are won with 15-under, or 20-under, which gives you an idea of the level.”

The top-10 in the Symetra Tour rankings at the end of the season will obtain cards to play the following year on the world’s premier women’s tour, the LPGA. Although so far she has not achieved particularly good results, she is confident of achieving a coveted top-10 place. "Yes, definitely, we have played six tournaments, but there are still at least 15, and with the confidence I have now in my game I see myself as being capable of achieving it."

Regarding her life in the United States, she says she gets along very well with her compatriots on the Symetra, and usually travels to tournaments with Nuria Iturrios. Normally they find accommodation in homes provided by members of clubs where the tournaments are played. "They help us a lot.” Or alternatively they rent online through Airbnb. The high expense of travel, accommodation and other living costs during the season is borne by Maria thanks to her sponsors, including Royal Sotogrande Golf Club, Berenberg Bank, Fertiveria, JME Venture Capital and Callaway.

Referring to Royal Sotogrande, a club with which she began her golfing association eight years ago, María says, ”For me it is the best club there is and it is a great privilege that they allow me to practise here.”

As for highlighting key aspects of the course, she says, "I really could not tell you because everything is very good: it's amazing.” She is also full of praise for the par-three course, which is being remodelled and which for her is "a perfect place for practising”.

The Royal Sotogrande course has many similarities with the United States, where María has been competing since last year. “It reminds me of them especially because it is a difficult, long course, with a variety of fairways, some wide and others narrow, and the grass... practising here is really good for playing on courses over there. This is one of the best courses I've ever played."

Born on 4 December 1997, María began to carve out her golfing future at only six years of age, when she asked her little brother, who was six years older and played golf at La Cañada, to let her try it and see what golf was all about. She picked up a club and on her first attempt hit the ball quite well. She got the bug and her grandfather, who had been working at Royal Sotogrande for 40 years but who did not play golf, began to take her to La Cañada every day. She immediately displayed her precocious talent, and began to win championships in Andalucía and elsewhere in Spain. She won a qualifying tournament for The Sotogrande International Golf Academy (SIGA), and was awarded a scholarship and placed under its sports “jurisdiction”.

In 2013 she moved to Madrid to join the Blume National Golf School, a high-performance sports centre, and she stayed there for two years. Later she would rise to number two in the world amateur rankings and eventually turn professional.