Unfortunately, it would be extremely unlikely — in current times in Spain — for a course like Royal Sotogrande Golf Club to be built again. We are no longer at the beginning of the 1960s, when the Costa del Sol began its tourist development and there were vast areas completely devoid of any buildings, and nor do we have a businessman with the initiative and vision of Joseph McMicking, founder of the Sotogrande urbanisation.

It was McMicking who told Robert Trent Jones Sr that he could personally choose the land where he wanted to build a grand 18-hole course, without any limitations.

It was the legendary designer’s first project in Europe and it marked a milestone in golf course construction on this side of the Atlantic, not only for his superb design but also for the innovations that surrounded the project: it was the first course in Europe planted with Bermuda 419 and the first to install a fully-automated irrigation system.

More than half a century later (the course was inaugurated in 1964), Royal Sotogrande needed an upgrade and, between 2015 and 2016, a renovation was undertaken that involved, in practice, a revamp of the whole course.  Robert Trent Jones’ original design was respected, with the exception of the eighth hole. It was extremely long, so it was shortened and given a more polished style. In 2017 the short game area was renovated, with three large greens and bunkers, and in 2018 the practice course was revamped, with target greens and bunkers, and a renovation of the nine-hole short course was initiated (it has just been completed). 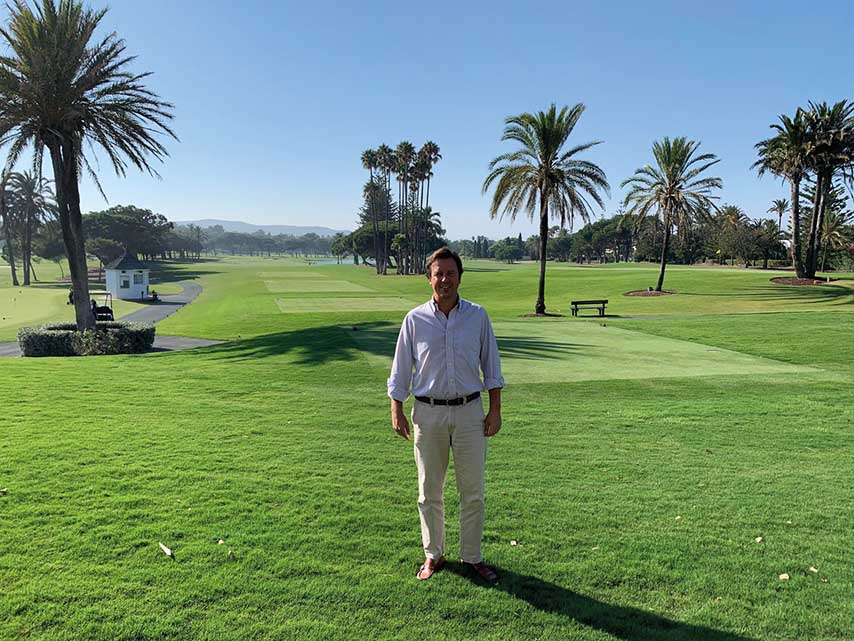 "It has been four years of very intense work and now it's up to the members to enjoy it," says Royal Sotogrande director Agustín Mazarrasa, who emphasises that, since the 18-hole refurbishment was completed in 2016, "the course during this time has been maturing very well. It has a spectacular drainage system and responds wonderfully even in situations of heavy rain.

"There has not been a single day when people have not been able to play in a buggy: the buggies have always been brought out, even after 70 or 100 litres of rain, which shows the quality of the renovation.”

In addition, he says, “the Bermuda grass has become well consolidated. It is very mature, and we are actually reaching a very high level of maintenance, which was the objective. The greens are very fast and are always in perfect condition. We are very happy with the result.”

When asked why he thinks the club deserves a place among the great courses of Spain, Mazarrasa argues the following… "I believe that Sotogrande is an exceptional course in Spain: there is no similar project. It is a typically American design, with very wide fairways, and excellent maintenance, and it is difficult to find such an outstanding setting, and such a stunning property adjacent to the sea. It brings together a series of aspects that are difficult to find not only in Spain but worldwide. And, above all else, what people who play this course stress is that they have had a lot of fun, because from the tee it is very open. It is not a demanding course from the tee, even though strategy is important, but it demands a lot on the greens, and then the wind is also a factor that can affect play considerably. People really enjoy the countryside, which is rare when we talk about golf.”

As for the most notable holes on the course, Agustín Mazarrasa comments that the star holes are the seventh and 15th, "although I also like the 16th and 18th a lot. The truth is that it is difficult to name only one, and I would say that now, after the renovation, al 18 holes are very good."

Regarding the future he envisions for Royal Sotogrande, Mazarrasa is extremely optimistic, especially as the club has about 2,000 members, and 450 children and adolescents under 18, “with whom the future is well guaranteed.

We are a club with a family spirit and we encourage families to come here so they can enjoy the club together. There are 27 nationalities, with 60 per cent Spanish and 25 per cent British.

"The future is great," he adds, "because we have greatly improved the facilities, because we have a large social mass and because, although it is a private club, we are also open to visitors and we attract golfers from all over the world.

"We have a very well-consolidated destination created together with Valderrama, La Reserva and San Roque Club, and every year thousands of players visit, and that is something that will endure over time."

In his opinion, the key to success is to maintain a high level of services, which have been greatly improved at the club. "Now," he explains, "we collect everyone’s clubs, we put a marshal out on the course to help visitors play faster, and we add many details: tees, water, towels, pyramid practice balls... The customer experience has improved and that is a plus for them.”

In 1966, Royal Sotogrande Golf Club held its first major tournament, with the best players in Europe teeing up in the Spanish Open, won by Roberto de Vicenzo with a total of 279. One year later at the age of 44, the Argentinean became the oldest player to win the British Open, after an exciting duel with Jack Nicklaus and Gary Player.

In 1970, the Sherry Cup was born, the original version of the current Royal Sotogrande Golf Club: European Championship of Nations trophy, which is presented every year to the best amateur from 20 European countries and provides a big boost to their C.V., as their name appears alongside former winners of the stature of Padraig Harrington, Sergio García and Rory McIlroy. In 1973, the seventh Ladies European Championship was held in Sotogrande, and the winners were England followed by France, Sweden and Spain.

In 1987, the club was the setting for Severiano Ballesteros’s victory in the Spanish Professionals Championship. Ballesteros was number two in the world rankings at the time and he had won four of his majors (1979 and 1984 British Open and 1980 and 1983 US Masters). This did not prevent him from having to fight a heroic battle against José Rivero to win the championship. Seve left behind wonderful examples of his incomparable talent, with one shot he holed on the last day from a greenside bunker on the 16th virtually sealing his victory.

In 20916, on 30 July, the 18-hole course was re-opened — you could almost say re-inaugurated — after a comprehensive renovation that lasted two years. The president of the Royal Spanish Golf Federation, Gonzaga Escauriaza, hit the opening shot of honour. Royal Sotogrande has always encouraged competition, mainly amateur. The 1966 the Open de España was held at Royal Sotogrande, which was a great international promotion for the club — inaugurated two years previously. It was won by Roberto de Vicenzo, at that time one of the best players in the world. He beat Ramon Sota, who, interestingly, was coach of the current Royal Sotogrande director, Agustín Mazarrasa.

"It was a very good tournament," says Mazarrasa, "and after that we had the Spanish Professionals Championship, which Severiano Ballesteros won against José Rivero, and then numerous Spanish Amateur Championships, a Spanish Amateur International won by José María Olazábal, and especially our iconic tournament, the Sotogrande Cup, which has been held since 1970."

For 25 years it was called the Sherry Cup, as the sponsor was the regulatory council for “Denomination of Origin” Jerez wines. Emma Villacieros, president of Royal Sotogrande for a decade, oversaw the tournament, and thanks to the sponsorship by Jerez wines it began to attract the best amateurs in Europe. Today, it is “one of the four top amateur tournaments in Europe, as its roll-call of champions shows”, says Mazarrasa.

“Maybe it could not be considered the leading amateur tournament in Europe, because the British Amateur and the European Individual Championship give you access to playing in the British Open and the Masters at August, but I would note that the Sotogrande Cup has had more prominent winners who have then triumphed as professionals. "You take the British Amateur, and you know four or five winners in its history, but our champions have included Sergio Garcia, who won it twice, Rory McIlroy, Padraig Harrington, Francesco Molinari, Shane Lowry, Carlota Ciganda... Jon Rahm lost in play-off in 2012, which shows how difficult it is to win this tournament.

"There have been other players who also didn’t manage to win, such as Justin Rose and Tommy Fleetwood. Tom Lewis came to play in 2011. He didn’t win but after a few weeks he turned professional and won the Portuguese Open. In 2014, Matthew Fitzpatrick, before turning professional finished among the last players and the following week he competed in a tournament on the US Tour and made the cut. All this demonstrates the tournament’s high level and status.” 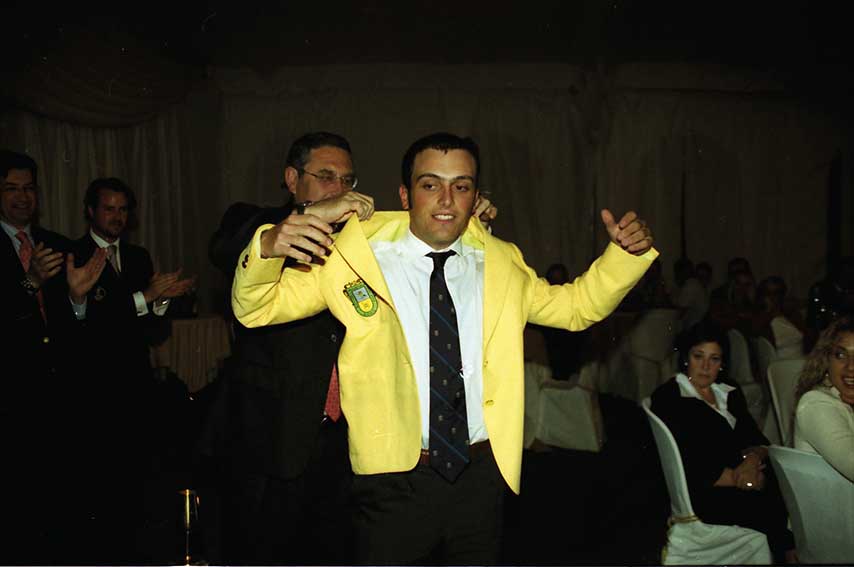 As captain of the national teams, Mazarrasa attended the tournament in 2008 and 2009 "and it was, and continues to be, a wonderful competition (it is always held in April and its full name is Royal Sotogrande Golf Club: European Championship of Nations). We put a lot of enthusiasm and dedication into the event: it has a scoreboard on the first tee with all the results, we have live scoring out on the course with volunteers every three holes with boards, and we have many other details. It is organised as a professional tournament, and amateurs who come from all over Europe have a great time here."